Contemplative Landscape of the Mind by Tung Hsiao Chou

The contemplative landscape on the canvas contains a calm and engaging place for the artist Li-lan. Beginning with empty sheets of notebooks, Li-lan has filled them in with her visual imagination, hovering ambiguously between fantasy and reality. That is her own space for free-flowing thoughts. The blankness of the white area in her paintings alludes to the air, to breath, and the rich palette of colors hints at delightful expressions. No matter if the imagery is a close-up or a zoom-out, each work reflects the artist’s peace of mind and her experience of cultural journey. Everything would be told silently. 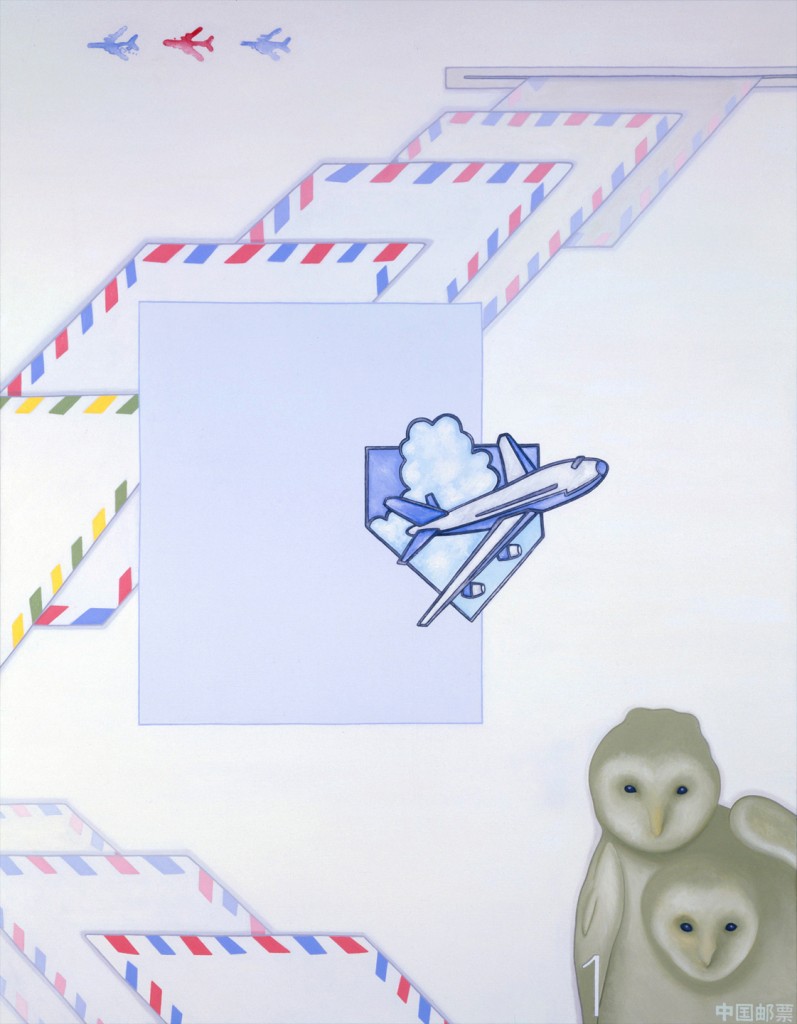 A decade after the millennium, the imagery in Li-lan’s work has been tranquil and peaceful yet full of energy and with implications of movements. The rectangle motifs of envelopes and postcards demonstrate the fundamental grid in her composition as usual. In addition to rigid geometry, there is a suggestion of passing time and diverse visual rhythms to her work. The multiple airmail envelopes of tonal variations look like they are being delivered or sent back (Bird of Minerva – 2004). Appearances of human figures, doing full body exercises, resemble the recordings of still shots in film frames to form a continuous sequence in motion (Fable – 2003 & Legend – 2003).

Li-lan invites viewers to the visual space that she has delicately constructed. The ragged edge of stamps disappears off the picture frame. It is similar to the zooming-in of a camera lens from faraway to a close-up. It resets the focus, and brings out the hidden place in the corner of a stamp or postcard. More unknown scenes have been revealed. Flying bees (Silent Journey – 2005), racecars (Be Bee – 2005), and airplanes (Mandarin Mandrill – 2006), take viewers from a bird’s eye view, through time and space, to the wooden sculpted doors open under a blue crystal roof. Seemingly, viewers step into a spacious courtyard and a Chinese lady’s study room where she concentrates on reading in a world of books (Contemplation – 2010).

Li-lan’s new work, inspired by the Japanese folktales of Kaidan, from the Edo Period, replete with narrative opportunities, provides free associations between imagination and reality, and guides viewers into her profound reverie. In fact, the impact of Kaidan on her work is more visual than bound to particular symbolism. The new canvases, where Li-lan represents various fictional Japanese ladies, with long hair blowing in the wind and beautiful costumes of colorful tones, seem to lead even more into the ethereal unknown.

The images in her work come from a wide range of cross-cultural sources. Eastern and Western culture subjects blend naturally in her work, co-existing in balance and in harmony, without conflicts, which reflects her life experience in multiple cultures. A Japanese geisha can be floating at ease in a dome of Renaissance architecture (Phantasy of Okichi – 2008). A lady wearing traditional Japanese dress, gracefully looking back, seems to walk from the red and white modern western architecture in the juxtaposed images (When the water recedes, the Ant eats the Fish – 2010). Li-lan hybridizes the source images, takes them apart to re-construct and represent them into new imagery. 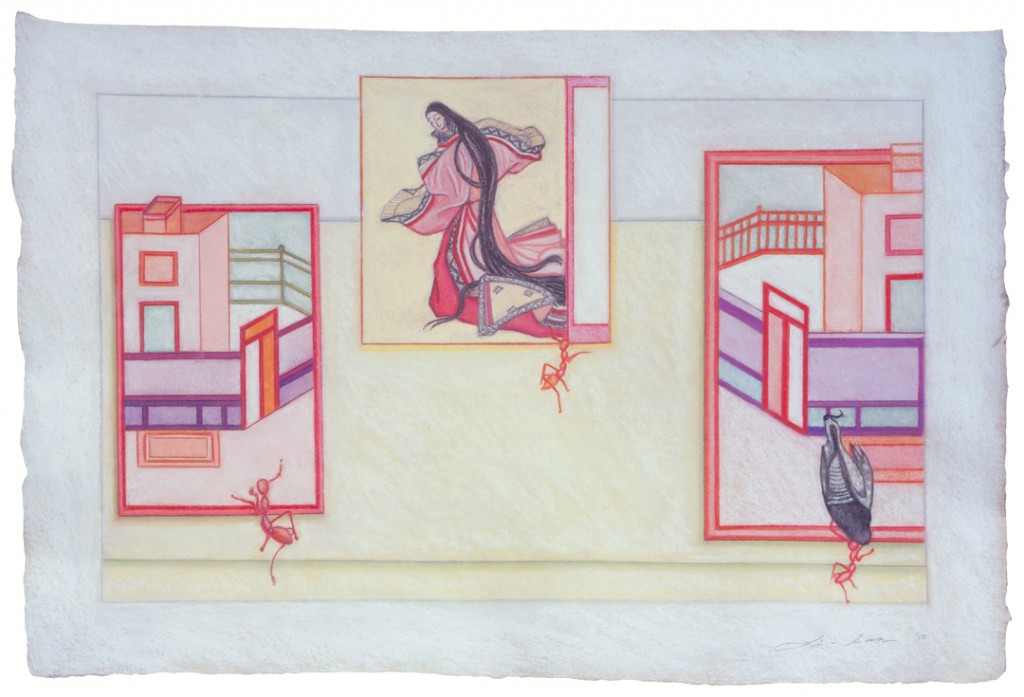 Therefore, in Li-lan’s pictorial world, there can be different scenes, different fantasies and stories happening simultaneously. The Japanese lady with a scroll at hand looks like she’s descending the stairs from the cloud (Doors of Kaidan – 2007). In the image next to it, under the vaulted ceiling, if we follow the bi-colored grid pattern on the floor, what kind of echo would be heard in the empty space, or what kind of landscape would the window overlook? In the painting referencing the “Tales of Moonlight and Rain” (Reflection: Rain in Moonlight – 2008), we find the vast glass atrium of rose windows, illuminated by moonlight, with clear reflections, the gaze from the ladies on their sides leaning against umbrellas, and a tiger salamander looking out. Not only are they responding to one another, but also offering free associations individually.

Fragments of daily life, infinite unbounded imagination, and meditative contemplation, are interconnected within Li-lan’s collage-like compositions. She observes, perceives, and represents the landscape of the mind with her rainbow-colored brushes.