What a true pleasure to see the small retrospective of Li-lan’s works recently at the Lin & Keng Gallery in Taipei.  Amidst the maddening hustle of urban life and of contemporary art in general.  Li-lan’s works reflect a deep personal quest for tranquility, for pause of breath and contemplation.

One room was given over to her drawings and prints, and one to her larger oil on canvas paintings.  All are meticulously rendered.  The drawings and prints included some of her earlier works from the 1980s when she carefully reproduced forms and ledgers in pastel and pencil.  As out-sized blow-ups of ordinary-day objects, these have a cool Pop-Art feel, but at the same time mange to avoid the hard, brash edge of Pop.  A closer look reveals a certain unevenness, the individual skew of the human hand.  The tones are low-keyed and soothing, a search for the kind of peaceful transcendence that is perhaps the attempt to answer a turbulent childhood.

Li-lan is the daughter of Yun Gee, one of China’s early modernists who traveled to the West to study art.  He eventually settled in Ne York, but his talent was eventually frittered away by depression and alcohol.  Today his works are highly prized in Asia, but the career of his only child, Li-lan, herself based in New York, is lesser known in this part of the world.

The paintings are some of her more recent works – her sly recreations of envelopes, postage stamps, and various postal markings – and naturally brim with color in the corners and edges, amidst fields of white or off-white space.  Although she has collected real envelopes over a long period of time, all her paintings are a design collage – she takes elements from different items and pieces them together, she omits detail, and she shows partial objects.

In China: 30 Yuan, for example, the airmail envelope bears two linked stamps which depict the outline of a person who seems to be swimming or floating in space.  One stamp is only the figure and the number “30,” while its partner has the additional element of the Chinese characters “Zhongguoren” (“Chinese person,” also the beginning of the world for the People’s Republic of China).  So here she has put the focus on the “people” part of this word, and not its nationhood. 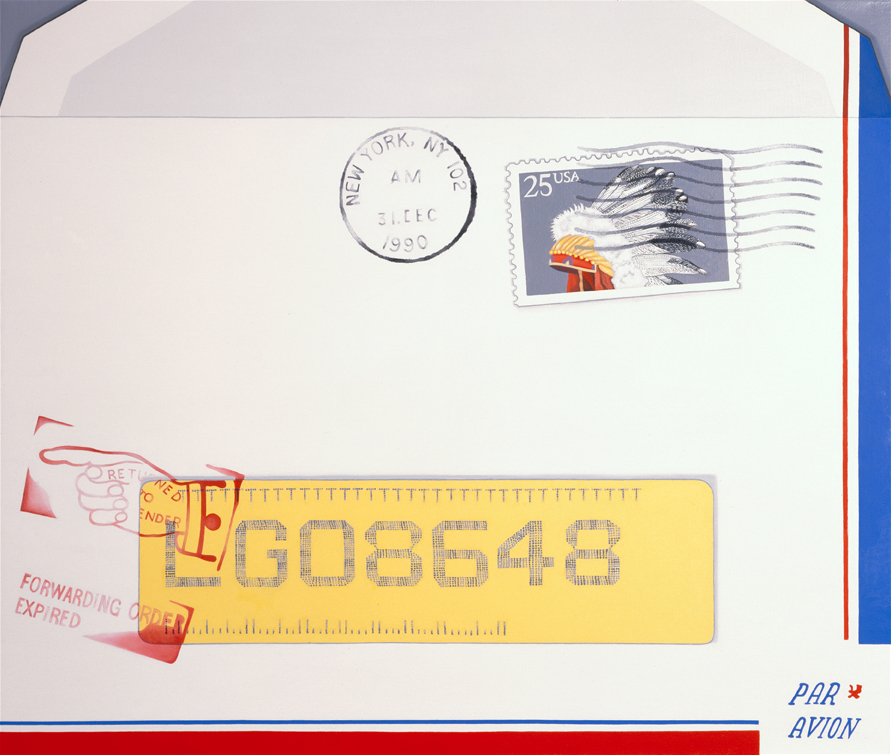 Return to Sender contains a softly political message – the stamp is an American one showing the headdress of a Native American.  There is no address on the envelope, but a sticker and a red stamp which read “Returned to Sender” and “Forward Order Expired” – all sly references to a civilization that was virtually erased from the American continent when the Europeans came.

And finally, some art looks infinitely better in some spaces than others, and Li-lan’s work look especially fine in the clean modern rooms of Lin & Keng, one of the spiffiest galleries on the Taipei scene.