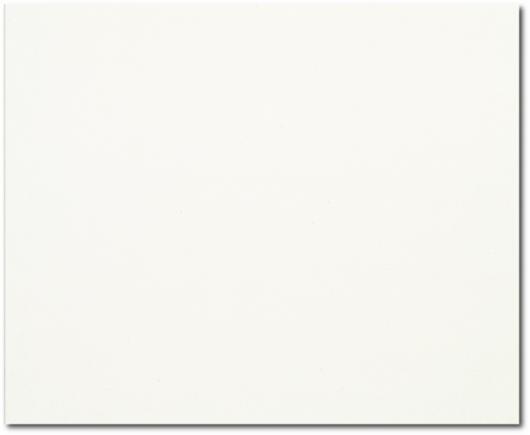 Empty canvas speaks to me: blankness anticipates a beginning and in the white quiet stillness I find a place for meditation and creation. Architectural imagery from East and West create spaces against the vast areas of white. In these spaces, and on the two-dimensional pure background birds and planes in flight, insects and animals, perhaps an occasional figure, invoke an illusionistic effect of varied perspectives, passages, boundaries: ambiguous transitions. 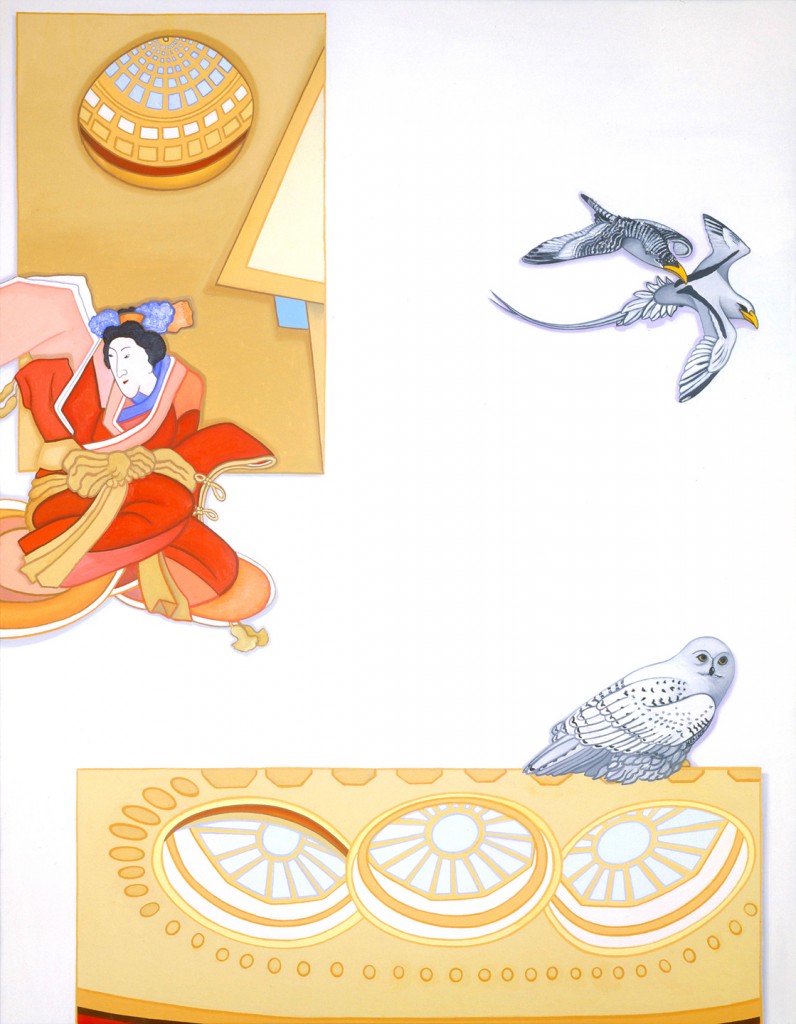 Architectural imagery in my work includes places I have been — China and Japan, Europe, as well as those that I have only seen in photographs. Some are imaginary sites I have invented from collage like sketches. My emphasis on communication across cultural boundaries has a personal resonance, often allowing my works to function as self-portraiture such as when I include images of my own eyes. In a 1999 diptych I painted my mother’s Western eyes as well as mixed race eyes that – as my father was Chinese – are mine. My eyes, together with other images I have drawn from around the world form a complex picture of how we define ourselves as individuals in a global context.

The pictorial imagery embedded in my paintings often has an element of hidden autobiography, sometimes overt. Archways, gates, doors and corridors may lead from one space into another, one time into another. They may lead from the near to the far, from the past to the future. Or they may be here in the now of my life. The different cultures and places I have seen and experienced have become images on my canvas and paper. When I stayed in Italy in the 60’s, I was enthralled with the magnificence of the frescos and paintings in Florence and villages I traveled to. The serenity and sublime colors were influences on my early work. When I lived in Japan in the ‘70’s, I was in love with the aesthetic and beauty – the quiet and the minimal – that I found in day-to-day life. Lately my trips to China and Taiwan have brought me a new knowledge of my Chinese heritage that was an enigma to me in my childhood. The cross-cultural life, and imagery in art, is indicative of the world I live in now, the world we live in.

The illusionistic images in my compositions emerge from my inner imagination. They develop as I paint rather than being drawn from pre-meditated, worked out representations. Metaphors and meanings in personal narratives have ambiguous, evocative meanings that may intrigue the viewer into imagining a story or dream of their own. The significance of stories, tales, or transitions — in my mind’s eye — become clear as the painting reveals itself. It takes me by surprise as multiple meanings of nature, flying, crawling or still objects that amaze, disclose my thoughts as my images grow and develop.

I paint in oil on linen and do pastel paintings on handmade paper. Although in reproductions and photographs my work looks flat – as in a graphic, in reality my work has texture and luminosity. In a painting, I will paint layer over layer over layer of different white oils, as well as layers in a variety of colors, to build up a rich background surface. I paint the architectural and other pictorial images over and over until a thick and luxurious texture emerges. The brushstrokes create a dynamic dimension – depth as well as the feel of the hand — clearly not a mechanical or technical process. 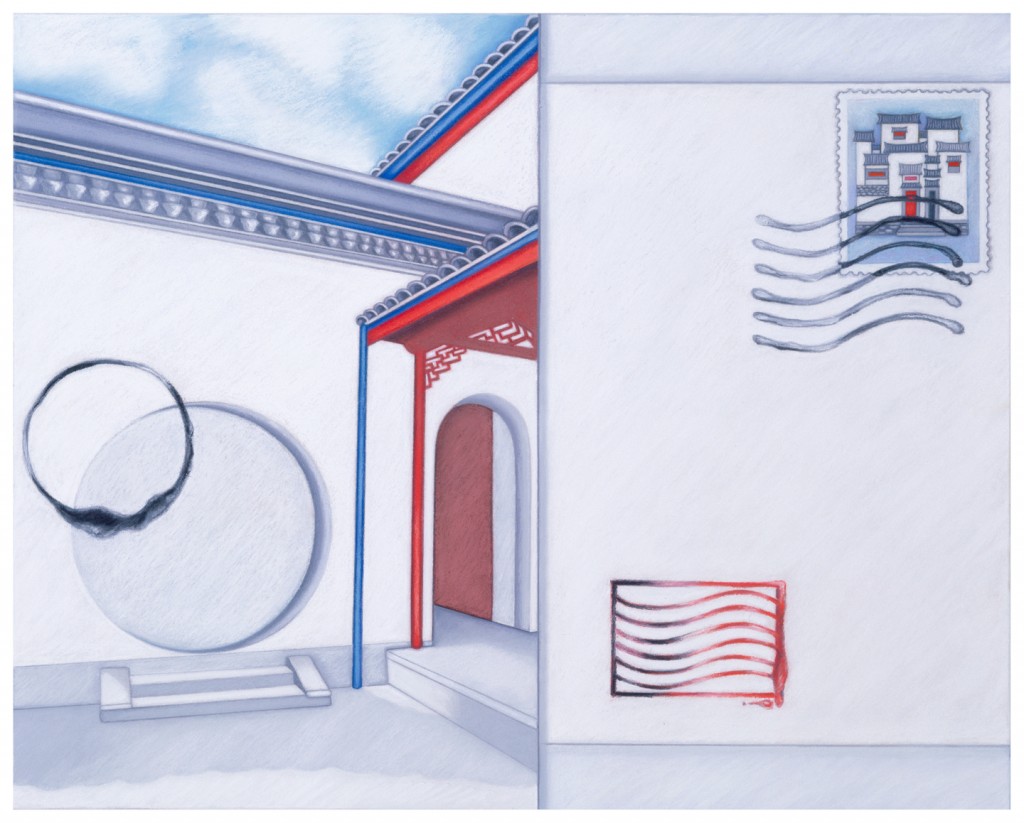 One white against other shades or hues of white creates luminosity and an enigmatic play of perspectives and boundaries. The subtle shadows I paint around geometric forms and images add to the mystery: what is background, foreground, inside, or outside of the architecture and the characteristics of nature? 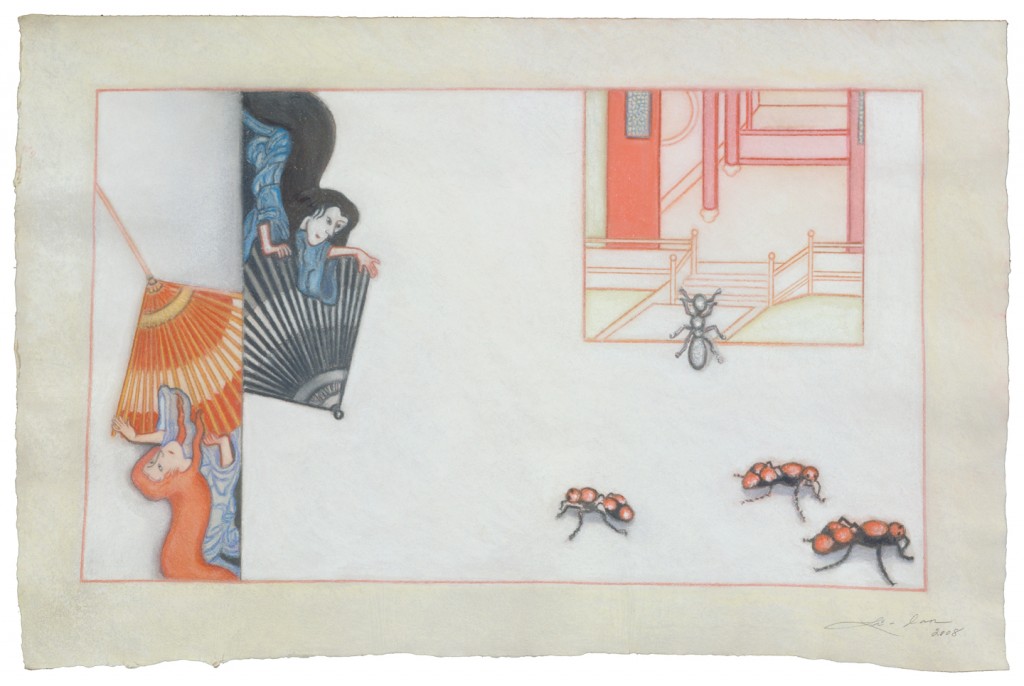 My pastels aren’t sketches for paintings. Rather, I think of them as Pastel Paintings. I also layer various whites over whites, and colors over colors with thick and thin pastels and pastel pencils to also create texture, soft, magical surfaces and visual languages.

I love art and the process of creating art, which I have been dedicated to since 1960.  Painting is my life – my wish is to paint and draw every day in the quiet of my studio – and I will continue on this path of creativity every day that I am able to.