“At the moment I am thinking that every ‘production’, as they say, of a concept or a system which is never without a name or effigy, is also the emissions of a postage stamp, which itself is a post card (picture, text, reproduction, and most often in rectangular shape).” – Jacques Derrida

Li-lan establishes in her work a language system centered on the metaphor of correspondence. She often paints blank envelopes, postcards, postage stamps, cancellation marks and other postal markings, which she uses as a means of correspondence with the viewer. Her meticulous images are improvisations on, not copies of, the postcards and stamps that friends send to her form many countries around the world, such as Malaysia, Denmark and Egypt. The images are often impressionistic, and always interpretive. In the end, her airy and light-filled compositions, and the rich textural nuances of the surfaces are quite far removed from the source material. 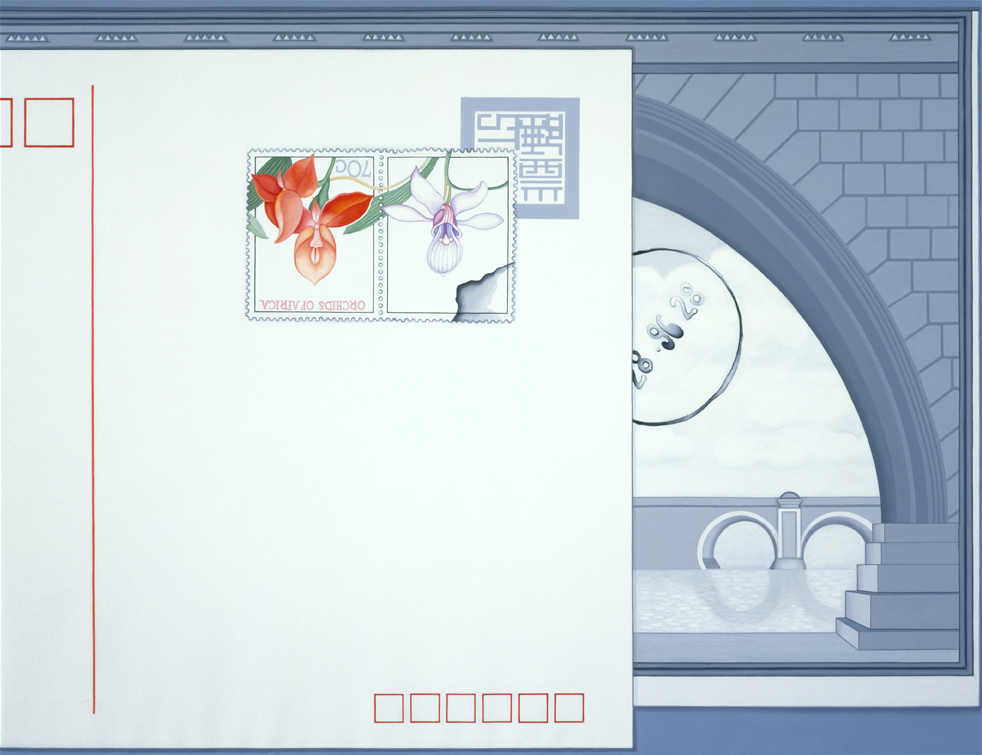 Li-lan’s strategy is evident in the large canvas, One Arch: Two Cards, Three Worlds, which features on the right a postcard image of a large gothic-style stone bridge and another smaller bridge reflected in a body of water. The scene, probably from England, is painted in delicate shades of gray, as if immersed in a dense London fog. Overlapping this image on the left is the back of a postcard, which is blank except for two carefully rendered “orchids of Africa” stamps from Liberia. They are situated near a square filled with Chinese characters that most likely read, “place stamp here.” In this moody piece the artist suggests a complex cross-cultural dialogue played out on abstract fields of cool gray and white. Touches of hot orange in the orchids and the sweeping circular forms of the bridge activate the composition and help perpetuate the dialogue. 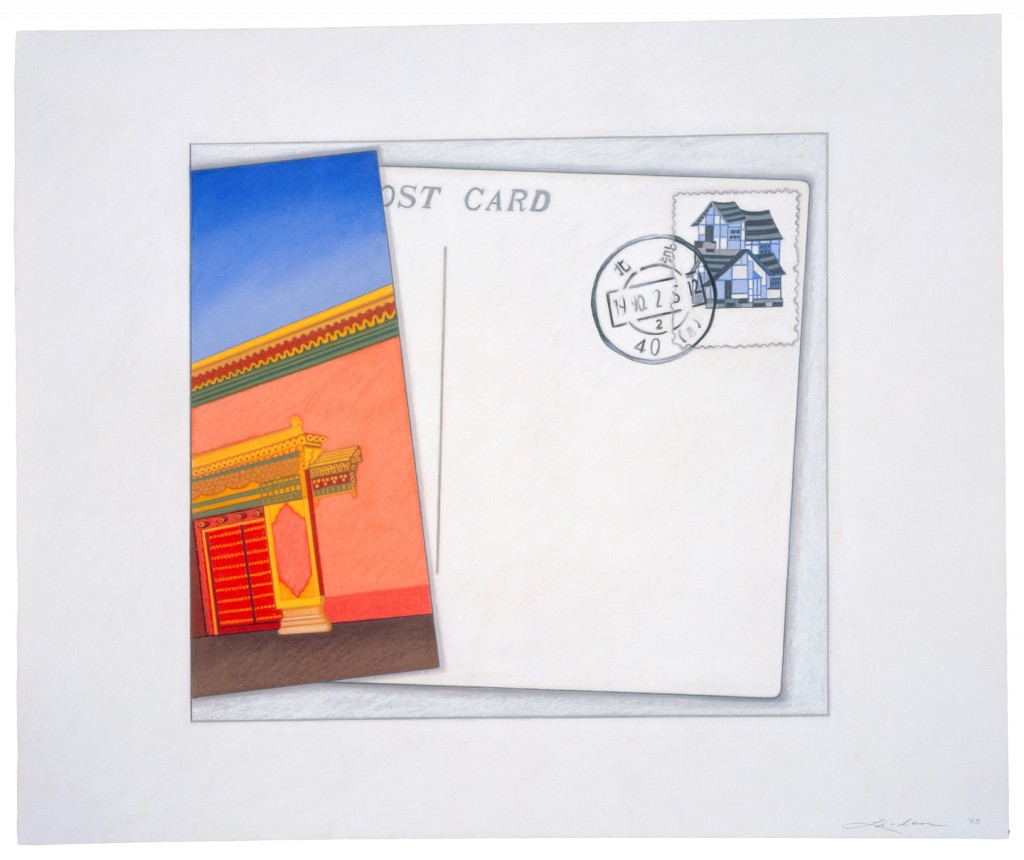 A large pastel, Two Sides: Red Door, shows the back of a postcard with a cancelled postage stamp in the upper right bearing an image of a group of humble-looking cottages, perhaps peasant dwellings from Medieval times. An overlapping fragmented card on the left features a highly stylized rendition of a bright red wall outside the Forbidden City in Beijing. In this work, Li-lan sets up a tense opposition between the architectural motifs, which touches upon broad socio-political themes. 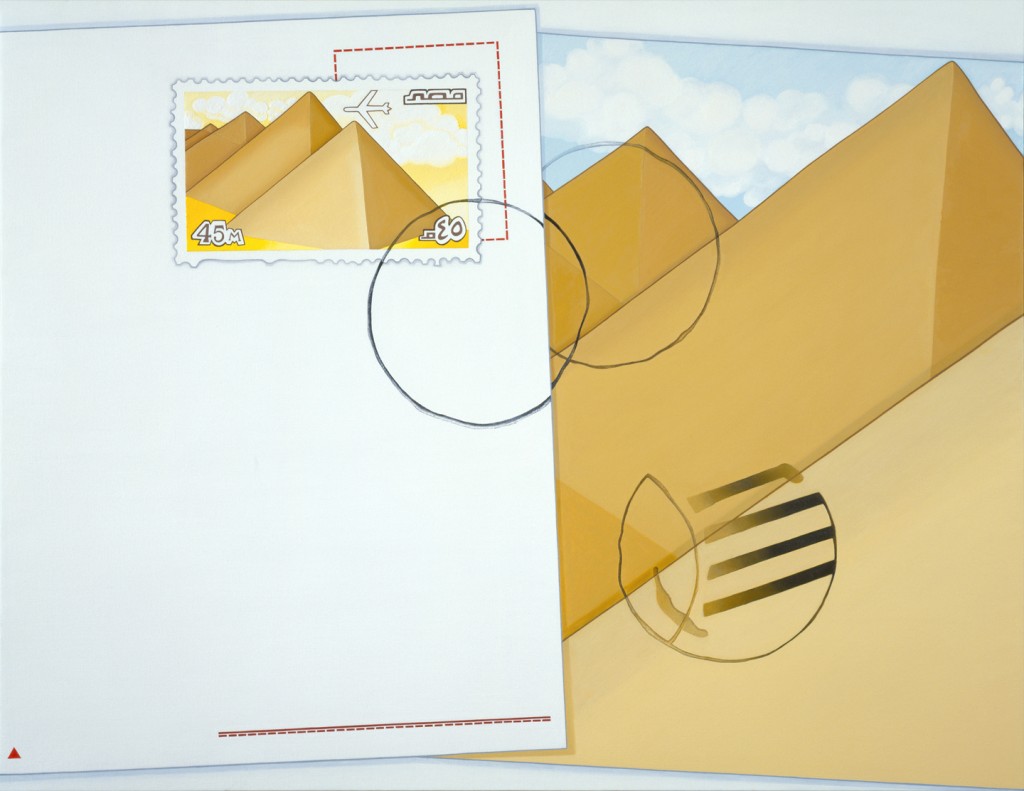 Both Sides of a Card is a large painting that indicates a dialogue with the past. On the right of this canvas, a postcard image of the Great Pyramids of Giza, is echoed on an Egyptian postage stamp painted in the upper left. Several circular cancellation marks in black, one traversing both sides of the card, seem to function as symbols for eternity. The painting, an ode to the great Egyptian monuments, is also a tribute to art’s ability to withstand the relentless advance of time.

One might say that the artist generates and transmits correspondence rather than engages in it. These stark compositions of crisp lines, expanses of white, off white, and bold passages of unmodulated, saturated color, at first seem coolly dispassionate. While the artist seems to be able to remove herself from the work’s intriguing missives, the paintings hint at deeply personal meanings. One often looks for autobiographical content in the work. American-born of part-Chinese ancestry, Li-lan has lived in Japan, and spends time studying Chinese language and civilization, the results of which are in tandem with the cross-cultural source material of her art. 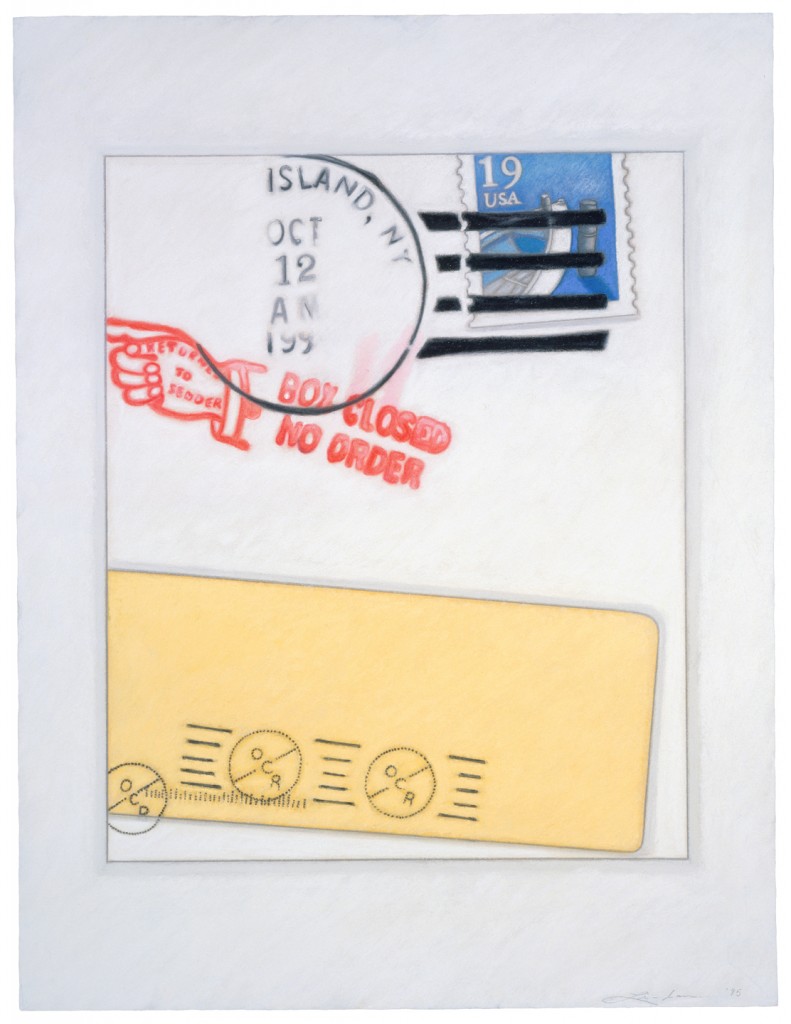 A number of works convey absence and loss. In fact, many images are of mail that is lost, sent to the wrong address, or returned for insufficient postage. Viewers are the accidental recipients of these misplaced intimate correspondences. Box Closed No Order, for example, is a powerful composition of cancellation marks and stamps. Apparently, this piece of mail has traveled far and wide, but has yet to reach its destination. The work seems to document a search, like that of a person seeking their own identity. The pastel Post Card: Landscapes of Guilin, is a record of an apparently personal exploration. Here, a mountain scene rendered in pale blue and green is an homage to the misty landscape paintings of the Song Dynasty. An overlapping blank postcard is adorned with a Chinese stamp showing a solitary figure communing with nature. One of the artist’s rare depictions of a figure, the image could be seen as a kind of self-portrait. 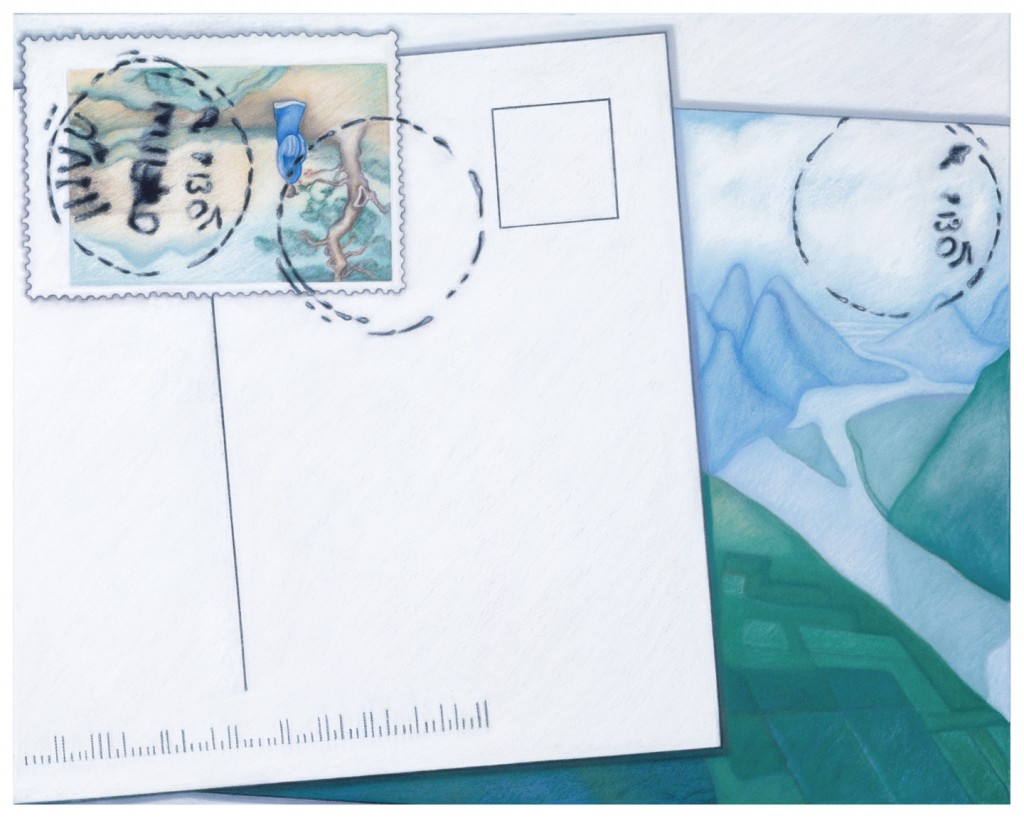 Certain works could be seen as effigies or monuments to specific, but absent individual. People, though nameless and faceless, manage to haunt the work in a manner that recalls the encoded references to a loved one that permeate Marsden Hartley’s early paintings, for instance. Figures never appear, but Li-lan constantly alludes to them, even in her most abstract works. 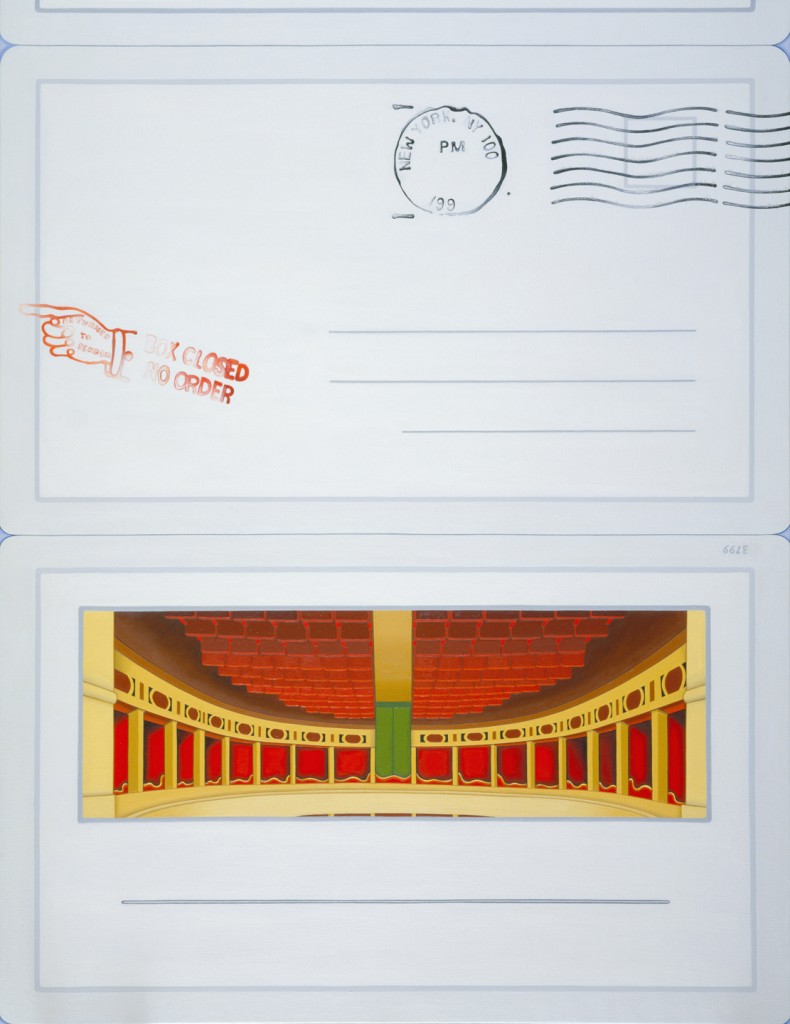 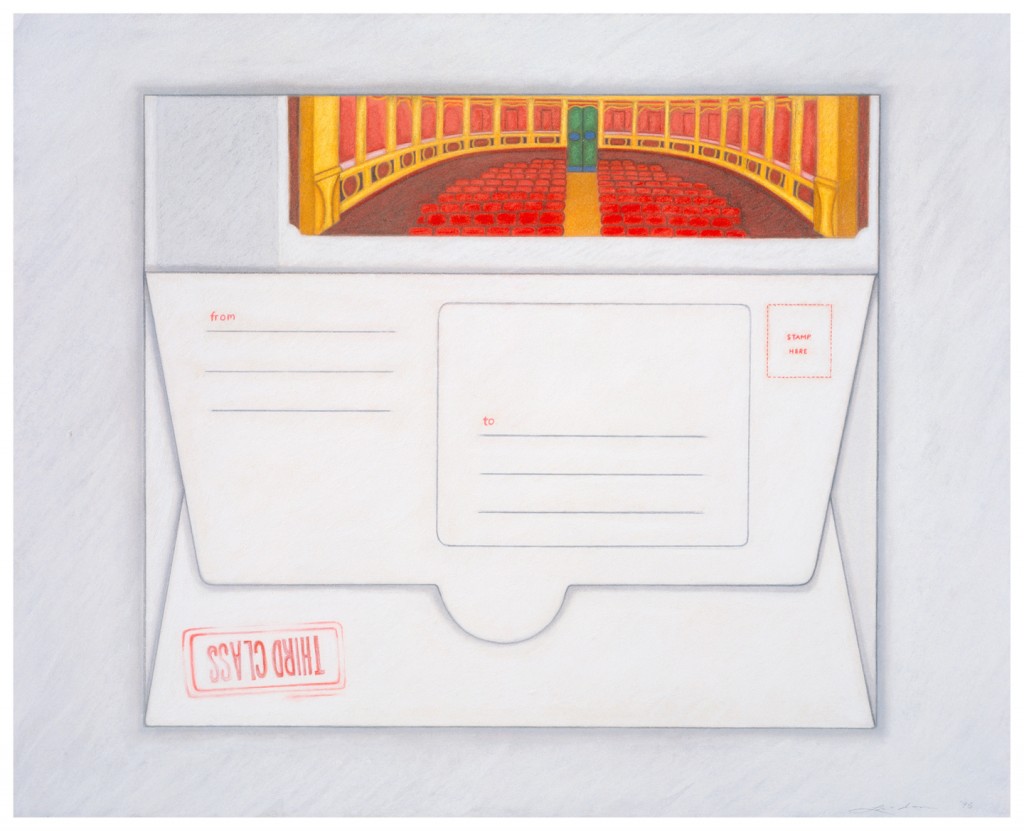 The 65-by-50-inch canvas Spoleto, shows two sides of a foldup postcard envelope. The bottom half of the canvas shows an upside-down image of an empty theater with bright yellow walls and red upholstery seats. The top half is filled by a blank address page marked with several cancellation stamps including a red “box closed no order.” In this image, a blank address form juxtaposed with the large empty auditorium, suggests a kind of Zen meditation on the self. As a contemplation on the relationship between the individual and society, the painting optimistically implies that for each of us there is a designated place in the theater of life. 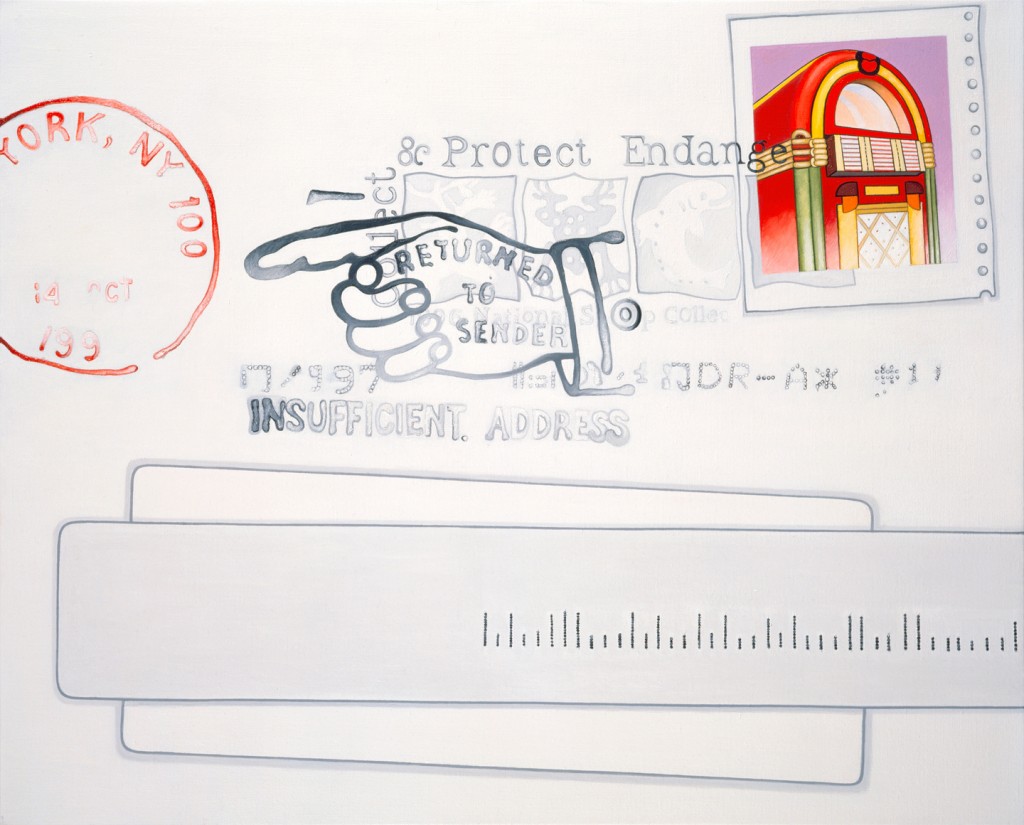 Li-lan, of course, avoids such specific readings of her works. These soft-spoken allegories, are never specifically didactic, and they are often laced with a large dose of humor. The pastel version of Spoleto, for example is full of Pop irony. Here, a glaring red ‘third class’ stamp, appearing upside down in the lower portion of the composition, undermines the ritzy elegance of the theater interior near the top. There is more than a dash of humor in Endangered Species, which shows a blank white postcard that apparently is itself distressed. It has suffered attack by rubber stamps – including one that says, “protect endangered species” – cancellation marks and computer scans. The cancelled postage stamp in this work features an image of what looks like an old ‘50s Wurlitzer jukebox, like the kind that play now all-but-extinct vinyl 45 rpm records. Just as the jukebox is an endangered species, one can imagine the mail as an endangered form of communication, superceded by other forms, such as e-mail. One imagines what a Li-lan e-mail image would look like. The artist, however, summons a certain romantic sensibility in her work that would probably preclude high-tech trendiness, although many of the paintings with overlapping planes evoke such computer imagery. 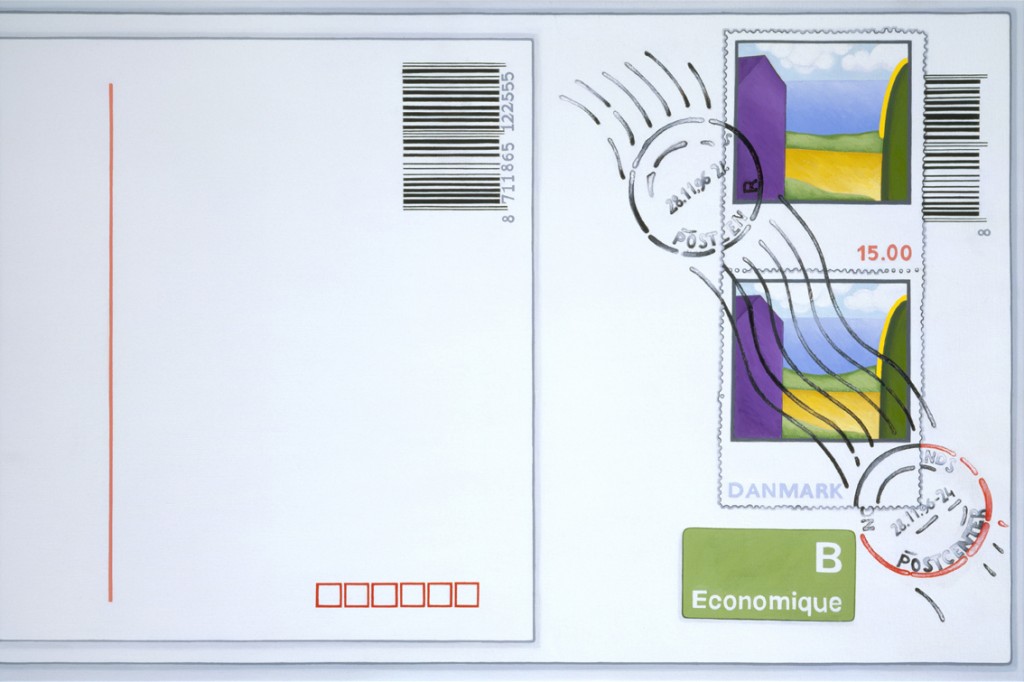 The computer age encroaches in the painting Economique B. In this stark and eloquent work, the rigid black lines of a computer coded price bar augments a Minimalist white field in the left portion of the canvas. The area to the right shows two Danish postage stamps of a purple mountain valley landscape. Long wavy black lines of cancellation marks cascade diagonally across the stamps like an abstracted waterfall. Here, Li-lan initiates a kind of reverberating dialogue between the finely calibrated abstract elements and an image that underscores the poetry of process. 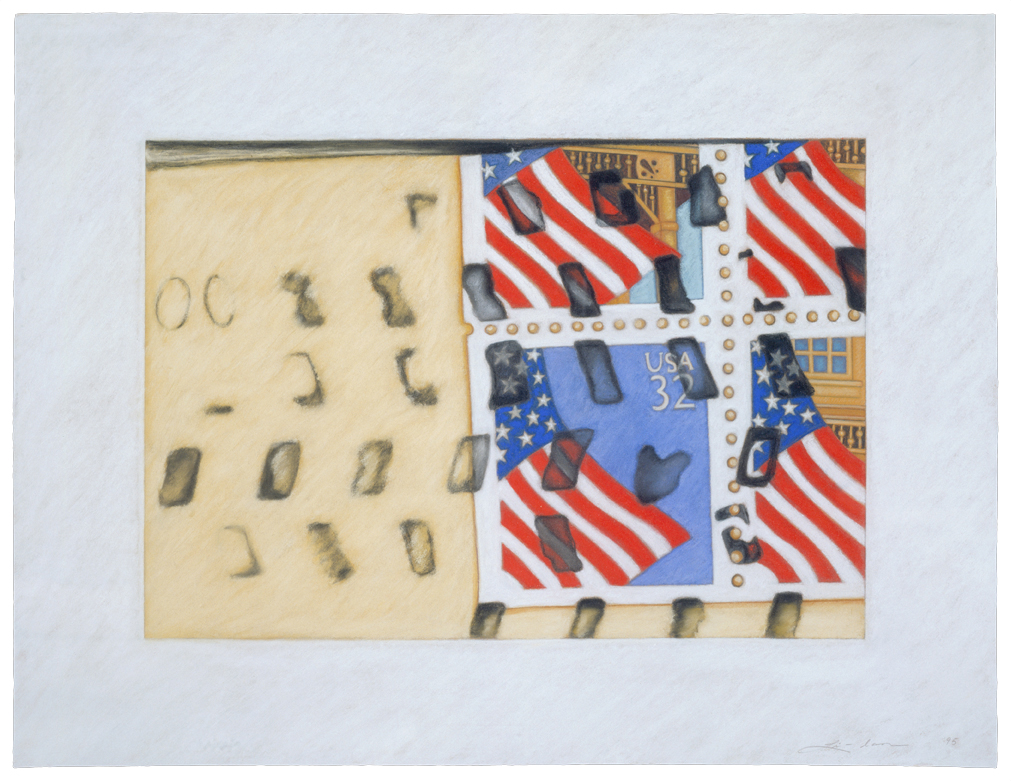 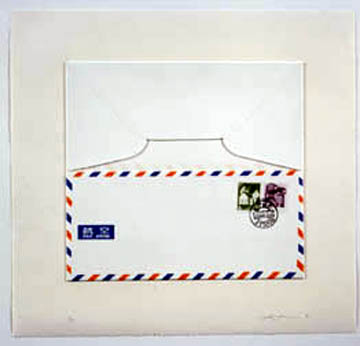 At times, Li-lan condenses her complex system into an abbreviated visual language closely related to Pop art. The large pastel From Brooklyn: Four 32s and the print, China: Outside In, for examples, are akin to Pop objects, especially those of Jasper Johns. Using a reductive approach to her subject matter, Li-lan isolates respectively, stamps and an envelope. The work tests the strength of the postal metaphor. Each has an emotional charge: one relates to the culture of her homeland, the other refers to her relationship with the land of her ancestors.

Li-lan’s use of postal imagery recalls a number of comments Jacques Derrida makes in his book, The Postcard, which centers on a postcard the author found that bears an image from a medieval astrological book showing – contrary to historical fact – Plato dictating his thoughts to Socrates, who dutifully transcribes them in a large book. Derrida refers to all postal imagery when he writes, ” . . . the postcard is no longer a simple metaphor, and is even, as the site of all correspondences, the ‘proper’ possibility of every possible rhetoric.”2

Li-lan, in her work, proves that the postcard is no simple metaphor. Her art conveys the subtle intricacies and dynamic systems of a self-contained universe. 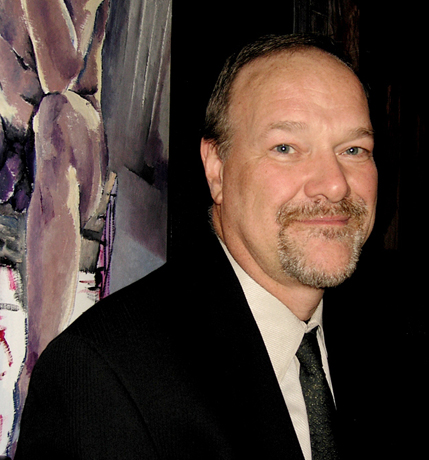 DAVID EBONY is a writer, an art critic, and an editor for Art in America magazine and a contributor to Artnet.