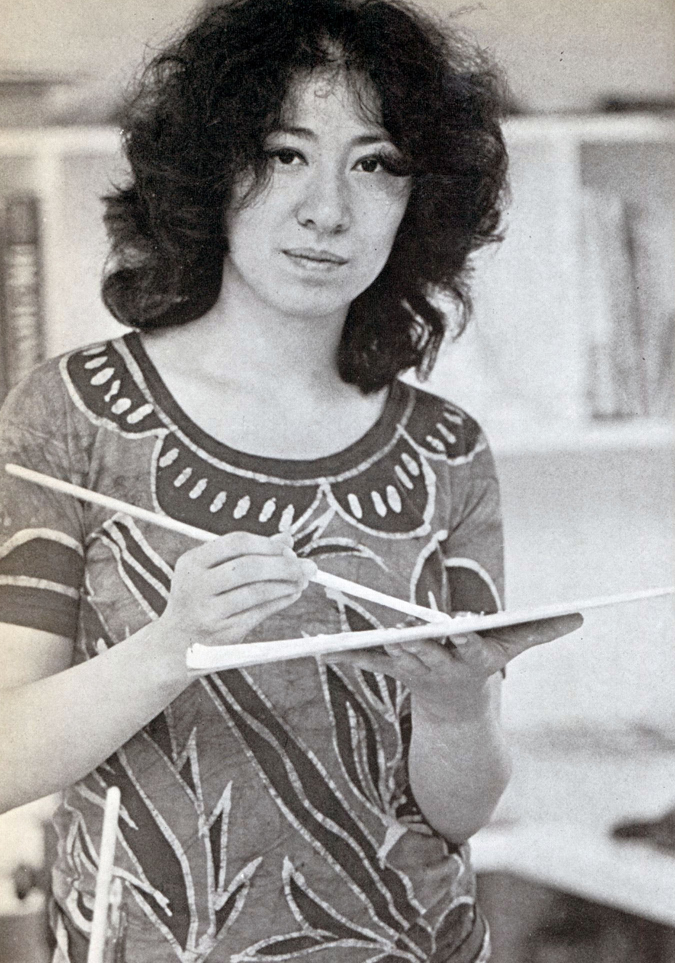 My crib was pushed up against the door of the tiny, dark bedroom of the East Tenth Street studio. I remember the sensation of being jerked back and forth — an unrelenting earthquake — while standing in my crib as my mother tried to keep my father out of the room. I remember his banging on the door. I remember the sounds – shrill shouts, angry yells, crying – but none of the words. I remember my own trembling at the force of emotions I couldn’t understand. The feeling, the room, the memory is so vividly etched in my mind as though it were a drama I saw only yesterday.
“But how can you remember that, Li-lan? You were only 18 months old . . .”
“Maybe you told me about it?”
“No, never. I never would have told you about that.”
“I thought maybe I confused it with a dream?”
“No, it happened, Li-lan. I can’t tell you how painful it was. The most difficult thing I ever had to do in my life was to leave your father. . .”

As my father’s alcoholism got worse he became unreasonable, suspicious, and even violent. Mistrust grew unmercifully within him. Demons plagued him. He brooded. He cried. But we had to leave.

I remembered my fear and I remembered chilling fights, but I couldn’t understand why we suddenly left the studio on East Tenth Street, and why I only saw my father on Sundays from then on. My mother said that she hid it from me but that she was nervous on all of those Sunday visits when I went to see him alone. He drank day and night. How would he react? Would I do something to make him angry? But it meant a lot for him to see me – his only child – and he acted the role of a father as best as he could. He, miraculously, held himself together, alone, in his own private world, all of those years. When I was older and saw him looking small in an oversize coat, lugging home shopping bags bursting with Chinese food, I marveled at his self-sufficiency.

My mother left with me. We moved to the back of a long, narrow, floor through apartment on West Fourteenth Street. The two long, narrow windows opened on to a narrow courtyard facing a high brick wall which blocked the air and light from reaching our room. I had tormenting daydreams of being trapped in that dead end labyrinth, of running into that impenetrable brown brick wall.

I remember standing in my crib nights watching my mother in a corner, on the other side of the long dim room; sitting hunched over a table under one small light. She seemed to be motionless but she was painting roses. Roses, roses, roses, an endless stream of painted roses. In order to support the two of us she had to work day and night. In the days she worked in a factory painting roses on heart-shaped porcelain boxes and at night, paid the piece, she painted roses on as many lids as she could carry home.

And so I started school. At eight in the mornings my mother would drop me off at Church of All Nations nursery school, and at six in the evenings pick me up as she returned home from the factory. I was two.

I vaguely remember feeling abandoned; of being frightened of the children. I clearly remember them sitting me on a chair in front of the class and shooting me with rifles while laughing hilariously; of them chasing me down long, dark mysterious winding corridors, and down steep cavernous staircases. The recurrent nightmare was as real to me as the long days at school. Once I ran away from school and I remember my mother’s frantic worry turning to anger when I was discovered late at night crouching down in the bottom of a telephone booth where I had hidden for hours. I don’t remember it but I am told that I refused to talk at school – they thought I couldn’t. They told my mother I was mute.

~ from Canvas With An Unpainted Part: An Autobiography – 1976