Pass on the Paint: Same Family, Same Career – But as Painters They’re a World Apart by Karen Rester 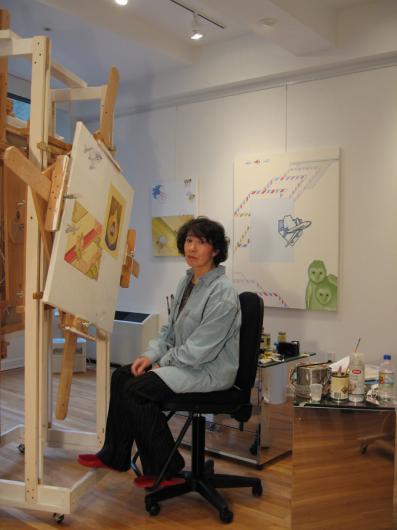 If I want to see where the Italian Gothic sculptor Giovanni Pisano learned how to carve fabric from stone I need look no farther than his father, Nicola. Likewise there’s more than a trace of the Flemish master Pieter Bruegel in Pieter the Younger’s landscapes and as well of Holbein the Elder in his son Hans Holbein’s brilliant portraits. But by the 20th century such pairings had seemingly disappeared from the history books. Why is that?

And then there’s the case of the Chinese-American modernist Yun Gee and his daughter Li-lan, two remarkable painters, each with their own distinct style. Indeed, unlike the Bruegels and the Holbeins, a comparison of their work would amount to pointing out their differences. What’s more, unlike the artistic families of the Renaissance, one would be hard-pressed to find a contemporary family that compares to the Gees.

I’m not an art historian so it’s quite possible that I’ve overlooked some obvious examples. Or I might surmise that until the 16th century when Leonardo da Vinci boosted the status of the painter from craftsman to artist, following in one’s father’s footsteps was somewhat anticipated if not expected. But with the rise of the middle class and a premium placed on individualism, in the Western world at least, things shifted so that by the 20th century if one chanced to be the offspring of a renowned painter, taking the same path to glory was to invite scrutiny of the most exasperating kind, and really wasn’t the idea to forge an identity apart from one’s parents?

Still, when I first saw Yun Gee’s work at the Marlborough Gallery on 57th Street last November, followed opportunely by a March exhibition of his daughter’s work across the street at Jason McCoy Inc., I immediately looked for similarities, hints of technique or wisdom passed down, assuming they must be there. I then spoke with Li-lan at her home in East Hampton and asked her about just this topic. Need I say the interview did not go as planned?

You were intrigued when I said the article would be about your father’s legacy.

Yes, my father left an abundant legacy: the great body of his artwork and also, through his writings, his thoughts on life. It’s a big responsibility. I think it’s important to keep his work alive and in the public eye in a way he would have wanted.

What do you think your father taught you about art?

As a child, I remember setting set up my little easel next to his, and he would paint and I would paint. We just did our own thing. I wasn’t “studying” to be a painter. And we never had what one would call a “student/teacher” relationship. Perhaps some kind of “osmosis” may have occurred at some level. I was very aware of Art and, more importantly, my father’s life as an artist, which contained a lot of sadness: racism, lack of money, short-lived success.

How did his work influence you?

Although my father’s work as an artist made me aware of art in a general way, I came to my own style of painting on my own. For instance when I was in Italy I loved the architecture, seeing Giotto, Fra Angelica, Massacio. Italy really influenced me a lot. Mostly my father influenced my lifestyle as an artist.

I guess I’m trying to get a sense of your relationship to his artwork.

He’s my father, but I don’t think my work relates to his. We are both artists, but separate and individual in every way. Both of our work inhabits a period in time: he as an early modernist, and myself as a contemporary artist.

Before ever meeting her I’d somehow gotten the idea that Li-lan, who is known for her linear work, had drawn nothing but straight lines for three years, something like the young samurai executing the same sword maneuver for days on end until he attains godlike perfection. What I’d pictured was a Chinese girl at her easel with that serene glow of determination that is so attractive on the female kung fu artist, drawing straight lines, one beneath the other, until her hand is nearly atremble with fatigue.

Then I met Li-lan and I’m embarrassed to say this anecdote is the first thing that came out of my mouth. It was the evening of her father’s opening at the Marlborough Gallery, where she was graced by some of the art world’s elite. Li-lan does in fact have a serene glow, which she directed at me before saying that she had no idea what I was talking about.

Li-lan is a master of the line, one of such delicacy and detail it seems more like a path in the sands of Long Island where she lives. Or if she were to sing one note, her voice being at once delicate and decisive, this is the trail it would make.

Why did you decide to paint?

At first, acting was my passion and I enrolled in the High School of Performing Arts in Manhattan to follow this dream. I would go to auditions, where the competition became a painful ordeal for me. Then, too, it was difficult for an Asian to get a role on Broadway at that time. When I graduated from high school, I rented a big loft with the singer Maria Muldaur. We were both 17. She would go to Gerde’s Folk City and I’d go to the Cedar Bar where artists hung out. The idea of picking up a brush had come to me again. I found that I wanted to paint all the time. I’m much more suited to be an artist, to stay in my studio and work all day.

Your motifs-the stamps, the planes, the fragments of architecture-how do you choose them?

For me it’s part of the process of painting. I don’t think about what I’m going to paint. Images just work themselves into what I’m going to do. I’m sure they have more meanings that I’m not aware of but they just come into my canvas. Some people may be intellectual or theoretical painters. I’m more of an intuitive painter.

In his forward to Yun Gee: Poetry, Writings, Art, Memories Anthony Lee gives an excellent account of Gee’s extraordinary life. Already at nineteen he was hailed as a modernist wunderkind in San Francisco and later in Paris where, in 1929 at age twenty-three, he landed his first solo exhibit at a major gallery-an unprecedented accomplishment for an unknown painter from the Far East. He next proceeded to shock the patricians by marrying one of their princesses-the poet Paule de Reuss, but not before appearing in two group shows at the Salon des Indépendants, followed by much wine-sipping with the likes of Paul Valéry, Gertrude Stein and other prominent avant-gardists in whose coterie he traveled.

With the outbreak of World War II Gee settled in New York where, despite solo exhibits throughout the 1940s (he was even included in a show at the Metropolitan Museum of Art called Portrait of America) he never achieved the acclaim he had in Paris. By the 1950s Gee had fallen into obscurity, deepened considerably by racism and poverty; it was one from which he would never recover.

He may now, thanks to the efforts of Li-lan and a growing legion of curators, art historians and collectors. They are all reconfiguring history in an attempt to place the forgotten Mr. Gee back on the mantle alongside the other great modernists of his day.

It looks like your father’s star is on the rise again.

My father always wanted his work to be appreciated. It’s very gratifying to see him recognized after so many years of his work being stuck in a storage room. There’s a lot of appreciation by the Chinese in Asia. They realize he was one of the first Chinese artists to come here (to the US) and make a name for himself, and he may be the first Chinese-American modernist.

What will be the defining moment when you can say, At last my father got the recognition he deserved.

He started getting much more recognition after the 1992 show at the Taipei Fine Arts Museum. It was the first time people in Asia got to see his work; he would have been 86. I guess most artists want museum shows, books on their work, articles written about them, and serious interest in their work. I really think he would be very happy now.

What for you would be the pinnacle?

For any artist, it would be wonderful of course to have a show at MoMA, the Whitney, the Guggenheim or any other important New York museum. However, there are many other factors that go into creating a successful exhibition: the curatorial team, promotion, and the ability of the museum to ensure that the artist’s work is shown in its “best light.”

As for myself, I feel very fortunate to have had exhibitions in New York, California, Japan, Taiwan, etc. All artists would like appreciation from the public and one’s peers, but if you’re always thinking about the art world and your career, your work itself can suffer.

Beijing? Well, who knows what will happen in the future?