As you read this sentence, billions of little paper rectangles are winging around the world: From Fire Island to Tierra del Fugeo, from Kalamazoo to Katmandu, humanity is staying in touch.

But more than happy holiday postcards, what come to mind are divided families, parted lovers, lives changed by bad news, friendships ruined by lost letters, hearts broken by the words “Return to Sender.”

The paraphernalia of correspondence – envelopes, postcards, stamps, cancellation marks – have formed  a central theme of Li-lan’s paintings for many years.

Her coolly meticulous canvases, in which the envelopes and postcards are always free of messages or handwriting, evoke the mingling of cultures, the urge to reach across barriers of time and space, and, because there are always missing pieces and empty spaces, loss.

Li-lan was born in Greenwich Village. Her father, Yun Gee, was a Chinese artist who left China in 1921 and her mother, of European descent, rant the Limelight, a coffee bar which was also a pioneering display space for art photography.

They divorced when Li-lan was 2 years old.  Taking the art she saw around her for granted, she grew up wanting to be an actress and attended the High School for the Performing Arts, “but I always felt like an outsider.”

“It was hard to be an Asian in school,” she said, in part because of prejudice and in part because of a certain self-consciousness she was always aware of, and she soon came to realize that not only was she temperamentally unsuited to ban actress but the paucity of roles for Asians would have made a life in the theater extremely hard.

So, when she was 17, she left home an got a loft with a friend, the singer Maria Muldaur, supported herself with a number of jobs, hung out at the Cedar Bar and gallery openings, and started a life as an artist.

“It was a different world then – no one thought they had to have an M.F.A. to be an artist, you just started working.  I always thought that my formal art education was hanging out in studio listening to artists talk.”

In the [late]1960s Li-lan married the Japanese artist and printmaker Masuo Ikeda, went to live in Europe for a while, and embarked on a life-long discovery of and fascinationg with other cultures that has been a predominant force in her life and work.  She and her husband were together for 13 years.

“We led a bi-continental life, half the time here and half the time in Japan.  I really loved Japan – I still go back and forth – and it was a very positive experience, learning about the culture, working and exhibiting there.  Eventually it got too much – Manhattan and Tokyo – so we bought this house for the quiet.  It’s still quiet, but in the 1970s it was really quiet.”

The artist, looking boyishly thin in a black Issey Miyake jacket and black pants, was talking in her house deep in the woods in Springs, a small but beautiful house wit a serene Asian simplicity, where she spends a lot of time each year and where her friends from all over the world come to stay.  “I’m not really a weekend person – it’s too distracting.  I like to come here for long periods so I can work.”

Among her regular visitors over the years was one of her oldest friends, the sculptor Isamu Noguchi, who, being half Japanese and half Irish-American, felt a great bond with her.

He wrote of her, “Li-lan belongs in the same way as I do to that increasing number of the not-exactly -belonging people.  I understood her sense of isolation and escape to Europe soon after I met her in early 1960 . . . How fortunate are those of us who have gained the constancy of art to guide and welcome us.”

Back in New York City after her marriage, Li-lan formed a wide circle of Chinse friends as the ethnic make-up of the city changed and for the first time was able to explore the Chinese side of her ancestry (“I had had no Asian friends when I was growing up, and I refused to learn Chinese from my father”).

She went to China with a group of artists in 1980 and was allowed to visit her father’s ancestral village.  Shortly after, she went to Taipei in Taiwan for a major retrospective of her father’s work.

“A whole new world opened up for me and it’s almost become another home.  I have many friends there and I return often for shows, the next one being in April.”

In fact, over the last couple of decades, she has had many solo exhibits in Tokoy and Taipei as in the more expected venues such as O.K. Harris Gallery and the Robert Miller Gallery in New York or numerous museum and university gallery group exhibits.

As well as her paintings, Li-lan’s unique experiences growing up and working as a Chinese-American woman in the Manhattan art world was of great interest in Asia.  In the 1970s, she was commissioned to write a book about her experiences, “Canvas With an Unpainted Part,” which was serialized in the equivalent of Japan’s New York Times.

“It wasn’t just autobiographical, it was also a cultural history of artistic New York City; in Japan they are very interested in what visual artists think about other things.  It took me – two years – I did it, but writing is really difficult for me.”

But it doesn’t seem inappropriate that she should have turned to writing, because paper in all its forms has been a lifelong inspiration.

In the early 1960s, her fascination was with legal pads, then business forms, then graph paper and notebooks, “all the wonderful papers.”  Then came a gradual shift toward the world of correspondence, starting with sheets of stamps, “whole sheets, but with some missing – there is always a void, something missing, it’s a theme that runs through all my work.”

The sheets of stamps are particularly fascinating.  At a quick glance there seem to be a number of identical stamps, but a closer look reveals dozens of minute differences.

“A lot of my own life is in my work, though it may not be apparent at first glance.  I use a lot of numbers that are significant, coded words, a certain kind of mind play that occurs spontaneously.”

And, although the paintings are rendered with delicate precision (the translucent exactitude of early Renaissance paintings is an abiding influence) and are built up in many layers of paint, spontaneity is an essential part of their makeup.

“It looks so meticulously planned, but it’s not, it’s quite random.  I don’t think I want to know in advance what I’m going to do.  I often go back and take things out, and that’s very hard – I have to use a razor blade and scrape the paint back to the canvas – but I love the process of painting and I work very slowly, so I don’t mind.”

Although traveling and living abroad has been an important part of her life, Li-lan remains a New Yorker.  She lives in …. In a loft on the 15th floor “with light on all sides and an awareness of the water around you.”

“It’s wonderful living in New York City.  You can attend a seminar at Japan House, eat in a Chinese restaurant, and then go to hear American jazz; you’re constantly exposed to different cultures, and that’s very important to me.  I’m biracial, but it’s not just that – having friends from all over the world, knowing artists from all different cultures, it’s something I respond to and need.  And it makes life so interesting.” 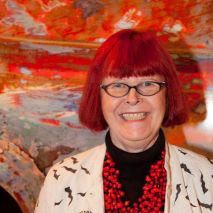 Sheridan Sansegundo, who lives in San Miguel de Allende, Guanajuato, Mexico, creates a weekly crossword puzzle for The East Hampton Star, a New York newspaper where she was the arts editor for 20 years.