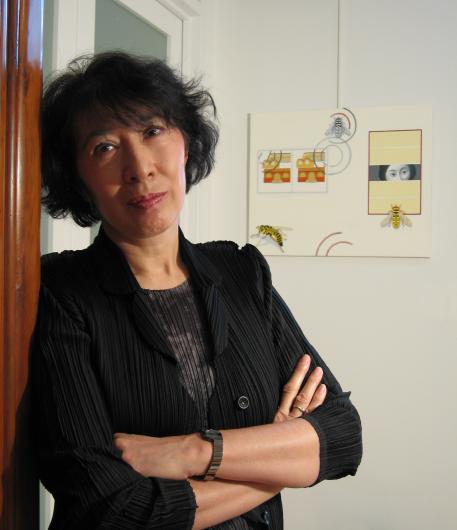 Li-lan, a Chinese-American artist who has lived in New York City and abroad since childhood, has maintained a studio in Springs since the early 1970s. Her most recent work is the focus of her upcoming solo exhibit titled “Li-lan: Reflections of Kaidan,” which will open on April 2 at the Jason McCoy Gallery in New York City and is curated by Carter Ratcliff, an art critic and contributing editor to Art in America. The show’s title refers to kaidan, a combination of two Japanese words: kai, meaning “strange, rare, or bewitching apparition” and dan, which means “talk” or “recited narrative.”

When initially observing one of Li-lan’s oil on linen paintings, one’s mind is quickly swept into the mysterious dialogue of her subject matter. The canvases are organized into various vignettes of culturally disparate architecture and scenery, often populated with arbitrary birds, insects, reptiles, and aircraft.

These characters are incorporated into the landscapes but can also be found drifting across the canvas, intercepting multiple landscapes, and articulating the multidimensional paintings with trompe-l’oeil accuracy. Li-lan’s subject matter is only one of the many diverse facets of her unique painting style and technique. This multiplicity is also a direct reflection of her culturally eclectic background and lifestyle, which has come to define itself in her paintings.

She is the daughter of the well-known Modernist painter Yun Gee, who immigrated to the United States from China at the age of 15. Despite discrimination and adversity, Gee developed a name for himself in both New York and Paris, exhibiting at the Museum of Modern Art in 1932, just a few years after the museum was founded.

In the 1950s, the artist’s mother, Helen Wimmer Gee, who divorced Yun Gee a few years after Li-lan’s birth, was also a pioneer, opening the Limelight Coffee House and Photography Gallery. This was one of the first photography galleries in New York, exhibiting works by the likes of Edward Weston, Robert Frank, and Brassai.

Li-lan was raised in the epicenter of the New York art world, Greenwich Village, during the birth and maturation of the Abstract Expressionist movement. This fertile art upbringing was certainly a great source of inspiration to the young artist, but when asked about her influences, Li-lan’s experiences outside of New York reveal the most about her artwork.

As a young woman, Li-lan began living overseas, both in Europe and Japan, with her then-husband, Masuo Ikeda, a Japanese artist. The architecture and overall aesthetic of Japanese culture and design spoke to her. This influence appears not only in Li-lan’s imagery, but also in the artist’s clean, minimal arrangements and their Zen-like balance of composition. Her vast white backgrounds act to diffuse the brightly colored scenes and characters, while directing the viewer through the space of the canvas, much like the shoji screens that divide and subdue her pristine studio in Chelsea.

During time spent in Europe, Li-lan became more familiar with artists like Kasimir Malevich and the Suprematist movement. The geometry and color of this style are obvious in Li-lan’s earlier works, where her paintings focused on imagery derived from graph paper to postage materials. These early paintings articulate each object’s literal meaning, while allowing the viewer to focus also on the surface abstraction. The works could be compared to the nonobjective hand-rendered grids of Agnes Martin, who was often referred to as a Minimalist but considered herself to be an Abstract Expressionist.

The influence of both these movements are apparent in Li-lan’s handling of paint. “It’s an incredibly slow process. If I only paint one layer or two layers, it really looks very dull. I want the paint to be rich, so I paint it again and again and again, in many layers, and then the last layer usually has some wax mixed in, which gives it more of a sheen…I want that feeling of depth in the paint itself.”

Up close, some of the marks appear to be carved or sculpted out of paint, when from a distance, they appear to be collaged. Li-lan’s meticulous painting surface and subtle modulation in color are reminiscent of the traditional Japanese plaster finishing technique shikkui, which, according to Hiroshi Sugimoto, a photographer, “absorbs and reflects light most evenly.”
The artist divulged that in fact she uses four different brands of titanium white because the shade of each varies slightly. The combination of these careful processes gives the paintings the depth and mass of a wall mural or ancient frescoes, rather than oil painted on linen.

In fact, Li-lan spoke about wanting to represent the peacefulness and meditative qualities of the frescoes of Fra Angelico in San Marco, Florence, but one cannot deny how the psychological complexity of these historical paintings also echoes in her work. Her landscapes are hauntingly familiar but nonspecific and often depict a deep and complex space, involving an entry or exit of some kind, combining interior and exterior spaces, as well as varied architectural references. The vignettes are frequently painted with a frame of color or dropped shadow, isolating them from the other elements on the canvas. As with the trompe-l’oeil insects and birds, this method serves as a porthole from the painterly surface of the canvas, to the spaces beyond our reach.

When asked about the mysterious elements depicted, the artist denied that there were any specific psychological narratives in the paintings. It seems the elements were selected in a free-associative way, for their formal qualities more so than their symbolism.
It is easy to assume these works, which employ many images related to travel and foreign lands, have something to do with the artist’s Chinese-American heritage and her living abroad for great lengths of time. When prompted to answer to this assumption, she replied, “Something of oneself is in everything . . . whether conscious or unconscious. Of course I feel cultural alienation . . . but this is not something I think about when I’m painting.”

Li-lan’s paintings may tease at possible interpretations, but their strengths lie in the narrative possibilities that weave in and out of contemplative spaces, both pictorial and literal, striking the strangely tranquil balance that defines Li-lan’s limitless imagined worlds.
She has exhibited extensively in the United States and internationally. Since 2006, four books have been published about Li-lan’s work, including “Experiences of Passage: The Paintings of Yun Gee and Li-lan” by author Joyce Brodsky, featuring works by both the artist and her father. The corresponding exhibit was presented by the Jason McCoy Gallery and the Lin and Keng Gallery in Beijing.

Jess Frost has published profiles on art world figures such as curator Klaus Kertess, collector Robert Rubin and Creative Time director Anne Pasternak. Acting as independent curator and advocate of the arts, Frost has organized a number of exhibitions and benefits auction as well.