Li-lan by Helen A. Harrison

Even before the advent of Pop Art, mass-produced printed materials such as bank notes, newspapers and postage stamps provided a rich source of imagery for artists. One thinks especially of nineteenth century trompe l’oeil studies of pinned-up letters, clippings and currency by William Harnett and John Frederick Peto; of Picasso’s and Braque’s Cubist still lifes, with their partial headlines and collaged scraps of actual newsprint; and of 1930s photographs by Walker Evans and Bernice Abbot in which billboards, poster-covered walls and newsstands overflowing with pulp magazines are recurring themes.

In Li-lan’s paintings of stamps, the aim is neither eye-fooling imitation nor objective documentation. Hers is an analytical, reductive art – an art that elevates the familiar by examining its essentials.

Like the Cubists, Li-lan edits her source material, focusing attention on various aspects of it. Like the Pop painters, she implicitly asserts that the boundary between fine art and printed graphics is indistinct, and that the selection and interpretation of subject matter, not some preconceived notion of appropriateness, is what gives art its validity.

When I asked her what it was about a sheet of postage stamps that originally sparked her interest, Li-lan told me that it was not the stamps themselves, but the printer’s color-separation key at the edge, as well as the grid layout of the overall sheet, emphasized by its regular perforations, that intrigue3d her. In later broadening her attention to include the stamps, she nevertheless retained a strong interest in the regularity of the grid structure, and in the serial nature of the offset printing process, by which each color is laid down in turn.

Still, she has not chosen to create hand-painted “philatelic portraits” by reproducing sheets, panes, or individual stamps. Instead, she concentrates on separate elements of the finished design, isolated within the grid and presented as if the images are materializing bit by bit before our eyes. As an artist, she is free to select aspects of her observations and to examine something of their fundamental character by revising them to show how pattern builds upon pattern to become the form we recognize as a stamp.

This freedom stimulates a similar creative liberty in the viewer’s consciousness. In addition to the gift of her aesthetic insight, Li-lan gives us visual “blanks” and challenges us to fill them in with our own conceptual imagery. She demonstrates how much the mind can do with fragmentary data. By choosing stamps as a common, familiar frame of reference, she enables us to reconstruct the missing information in the mind’s eye. Her work is thus a conversion among the seen, the remembered and the intuited, spoken in the language of the imagination. 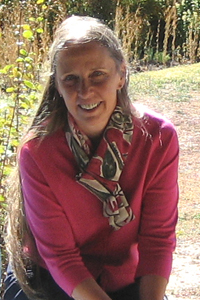 Helen A. Harrison is the director of the Pollock-Krasner House and Study Center in East Hampton, New York. The museum, a National Historic Landmark, is the former home and studio of Jackson Pollock (1912-1956) and Lee Krasner (1908-1984), two of the foremost Abstract Expressionist  painters.