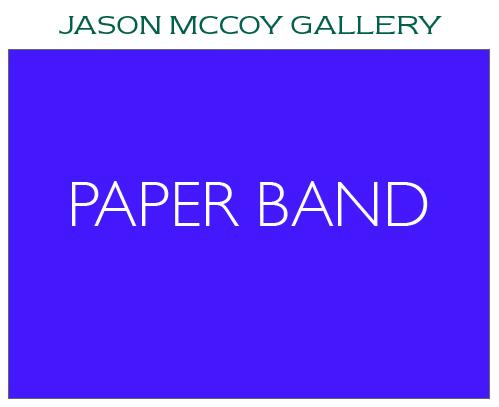 Jason McCoy Gallery is pleased to present its summer group show entitled PAPER BAND, which comprises works on paper by 100 artists.  While the earliest examples, including a drawing by Gustav Klimt date back almost a Century, most drawings, collages and paintings on paper have been created within the past decade.

The works featured in PAPER BAND vary in scale and presentation.  They are installed closely, side-by-side, to form a tight knit group, as well as a visual running band along the gallery’s walls.  Though the assembled range of stylistic and aesthetic approaches is eclectic, each work relates to its immediate left and right hand neighbor.  This considered relationship can be either a formal nature, refer to technique, similarities in palette or sentiment.

PAPER BAND incorporates a large number of artworks that span several generations and at times differ greatly.  Nevertheless, the overall installation translates as a visual thread of thought that seeks independence from a more literal or traditional concept of grouping likeminded artists, movements and aesthetics.  Rather than aiming to illustrate a thesis, PAPER BAND pays homage to a medium that has proven an infinite source of inspiration; it also celebrates the unexpected connections that can be found between works that at first glimpse seem to have little in common.