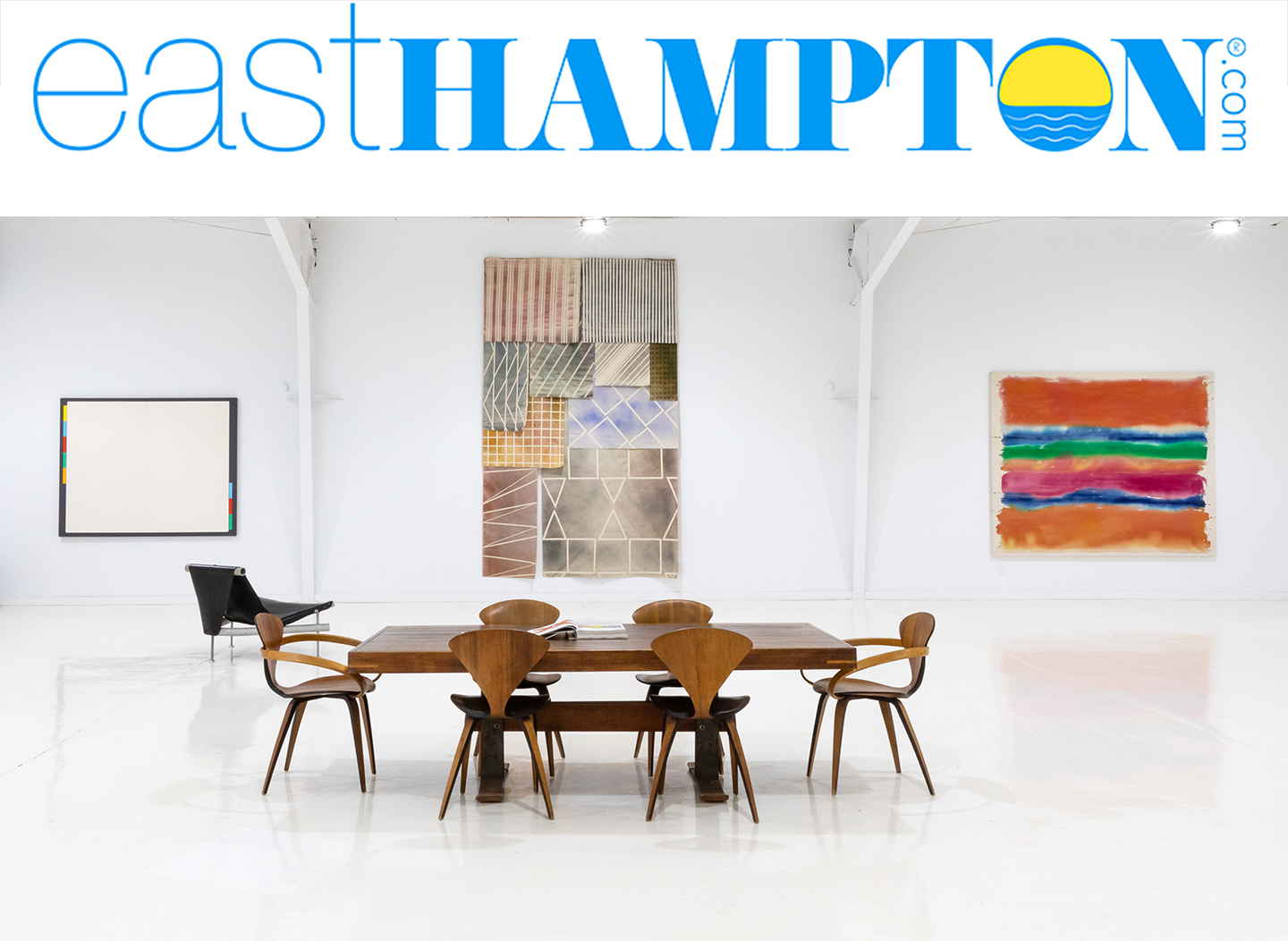 Celebrating the formal ingenuity of postwar women artists with connections to the Hamptons, Eric Firestone Gallery presents Hanging/Leaning: Women Artists on Long Island,1960s – 1980s. Representing a quest to expand the abstract mode with new techniques, materials, and perspectives, these female artists found the influence of the East End —with its communities of fellow artists and nurturing gallery owners, light serving as an inspirational force, and the surroundings, endless beaches, unpopulated dunes, surf-graced shores —a natural frame for their daring experiments with form.

Hanging / Leaning: Women Artists on Long Island, 1960s–80s manifests Eric Firestone’s interest in reexamining the postwar art scene on Long Island. The show (until June 26) which revisits this rich history of women making and presenting art on the East End will unfold across the gallery’s spaces in East Hampton: its primary location at 4 Newtown Lane; and its 7,000 square-foot warehouse at 62 Newtown Lane opening to the public for the first time.

SHARED PLACE
Shared place is the unifying principle for the Firestone show, the scope of Firestone’s Hanging/Leaning exhibition is not confined to certain art forms or the usual suspects, rather it is an expansive view of these remarkable female artists. Postwar Long Island was a hub of artistic activity where collectives flourished beyond the New York City scene. Visionary gallery-owner Leo Castelli known for nurturing some of the most tremendous talents of the era, introduced Miriam Schapiro to the area, her breakthrough work linked modern painting to women’s craft. She bought a house in Wainscott in 1953 that became a legendary gathering place for artists and allowed her to cultivate her own abstract lexicon.

Affiliating in 1970s and ‘80s with a collective of mostly Black American practitioners in Sag Harbor, Nanette Carter found community with Al Loving and other Eastville Artists. In Carter’s oil pastels from that period, Illumination #1 (1984) and Illumination #41 (1986), countless miniscule marks swirl within surges of organic forms that visualize sound waves. But hers is one of many stories of women artists who found kinship with one another out East. Pat Lipsky wanted to be close to Lee Krasner and Jackson Pollock so she rented a house near their East Hampton residence: “I thought being that close some of the Pollock vibe might waft my way, and certainly the edges on my paintings that on my paintings that summer, 1969, are an adaptation of his drips.”

The feeling of earth, sea, and sky, that interplay between them, caught Sheila Isham’s eye. She integrated her beachy surroundings into her work, holding seaweed, sponges, and other substances against the canvas, then spraying acrylic around them with an airbrush creating a literal sea-swept storm of color. Texture and tone transform Michelle Stuart’s work on paper, she rubbed Long Island soil and other elements to record marks made on the earth. Sand-blasted glass expressing the freedom of space and her blossoming gardens in Southampton eventually became the medium of choice for Patsy Norvell who earlier on created abstract work incorporating human hair. Long Island streets and ponds appear in the practice of Li-lan whose work underwent a sea change under the influence of East Hampton’s natural daylight: “My bright city colors first turned dark, then darker; then white. The paintings became quiet and full of white light. Slowly, the white of the outside became the white of inside. White paper, pads, and notebooks that had been in the background, gradually became the foreground.” For Kay WalkingStick, her 1983 residency in Montauk via the Edward F. Albee Foundation became a watershed moment as her work found its roots in the area’s topography integral to her abstract and representational compositions.

LOYAL SUPPORTERS
While Abstract Expressionism and Minimalism were gradually losing favor in New York City in the late 20th century, quite a few organizations on Long Island gave women space to showcase their evolving formal aesthetics. Beverly Pepper and Barbara Zucker were featured in exhibitions at the Nassau Art Museum in Roslyn. Guild Hall in East Hampton, itself female-founded, showed Schapiro, Li-lan, Carter, Mary Grigoriadis, Sheila Isham, and Adrienne Mim; while the Parrish Art Museum in Water Mill displayed Schapiro, Li-lan and Slavin. Acquiring their early work and in doing so, placing a recognizable value on it, such institutions continued to support such artists and others like Valerie Jaudon. Although Howardena Pindell did not exhibit at such regional institutions—and vocalized how SoHo and the Hamptons did not embrace minority artists—she has spent a great deal of time on Long Island teaching art at the State University at Stony Brook.

The Hamptons champion of emerging female artists became the Elaine Benson Gallery in Bridgehampton. Though getting established was not easy, Elaine Benson herself explained: “[Artists] were reluctant, because there were no galleries here, they were all in New York, and there was a theory that if you had a show out here, people would come to the party and drink your wine but would never buy anything.” Yet by the 1980s, the dynamic changed. Artists sought her out, her openings and parties were coveted invitations and her client base equally desirable. Once emerging now celebrated, a number of female artists earned solo shows at Benson’s gallery setting them up for more in depth shows at Long Island museums.

But the exposure was a double-edged sword, all-women shows could be “the kiss of death,” observed Joan Semmel whose 60s, 70s work with bright saturated colors, dense clusters of shapes, and unusual spatial dynamics started to pick up the tempo of the times, shifting by the 80s to psychedelic palettes and surreal figure-ground relationships. But luckily, her dubious premonition proved wrong however as she went on to show in a groundbreaking exhibition of canonical feminist works.

SUN, SEA AND SKY
Trailblazers, true pioneers in the contemporary art world, the women artists in the Eric Firestone show Hanging / Leaning: Women Artists on Long Island, 1960s–80s are a fascinating group, each one’s oeuvre reveals so personally how the influence of the East End infiltrated their work. Sun, sea, and sky may have permeated their mindset, yet they ventured into territories women artists had not gone before, breaking boundaries and evolving mediums and methods. The show is up until June 26, go see it without delay, let your contemporary eye find momentum in the waves of talent emanating from this superb show.

Eric Firestone Gallery is pleased to announce Hanging / Leaning: Women Artists on Long Island, 1960s–80s through June 26, this sweeping exhibition celebrates the formal ingenuity of postwar women artists with connections to the Hamptons.

Katlean de Monchy is a natively trilingual innovation scout who travels the world to see, find, and show new technologies that will make our life better.  First on the scene with her pop-culture trend forecasts, Katlean de Monchy reveals how style and technology are converging to change the way we live today – and tomorrow. On the inside track as she reveals the human side of technology – the stories behind the start-ups and the individuals innovating at a corporate level – Katlean inspires her audience with a fresh, exciting vision for the future.