Li-lan is known for her paintings of various kinds of writing surfaces: stationery, ledger pads, the spread of an open notebook, and in her most recent paintings, stamped airmail envelopes and blank sides of postcards.  In spite of the work’s Pop imagery, its cool, spare look of Minimalism, and a meticulous technique that seems related to Photo-Realism, it does not fit into any of these categories.  Li-lan does not use photo-projection as part of the painting process and her work touches upon themes of communication and language in ways that lack the dispassionate irony of Pop and Minimalism.  The surface textures of her canvases are rich and varied, achieved with surprisingly expressive brushwork of creamy, smooth impasto, especially in painting the stamps and cancellation marks.

The 13 works in this recent show featured carefully rendered stamps and postmarks from around the world.  Although the postcards and envelopes are bereft of handwriting or personal messages of any kind, the stamps, from exotic and fascinating places such as China, Egypt and Italy, suggest some intriguing or perhaps romantic correspondence and also seem to refer to international relations. 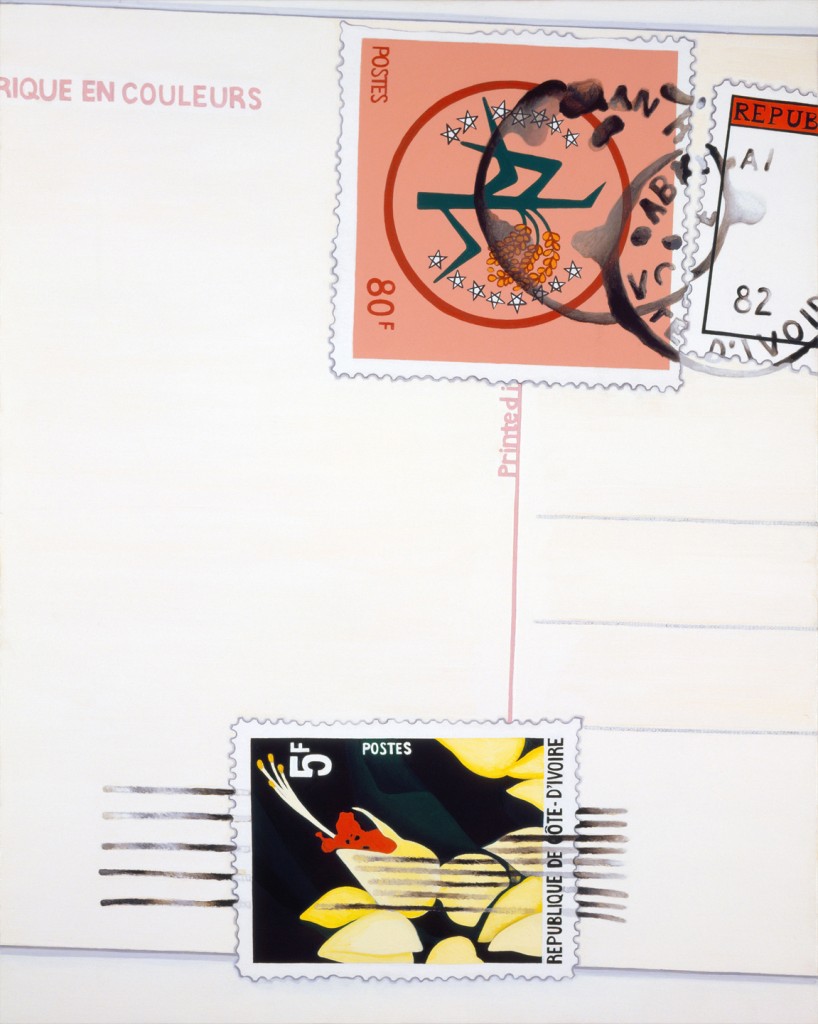 An approximately 3-by-3-foot painting, Afrique en Couleurs, is a detail of the central part of the back of a postcard from the Ivory Coast.  This graphically powerful composition is anchored by two large, canceled stamps, one at the top center and the other near the bottom center of the vertical canvas.  The bottom stamp is an image of a yellow-and-red flower against a black background.  In the stamp at the top, with a pink background, a green stalk of grain is surrounded by a halo of little stars.  Separated by the expanse of white, the stamps seem to be set in opposition to one another.  It’s tempting to attribute symbolic significance to them.  For instance,  the grain symbolizes food, one of the necessities of life, while the flower could signify beauty and life’s luxuries. 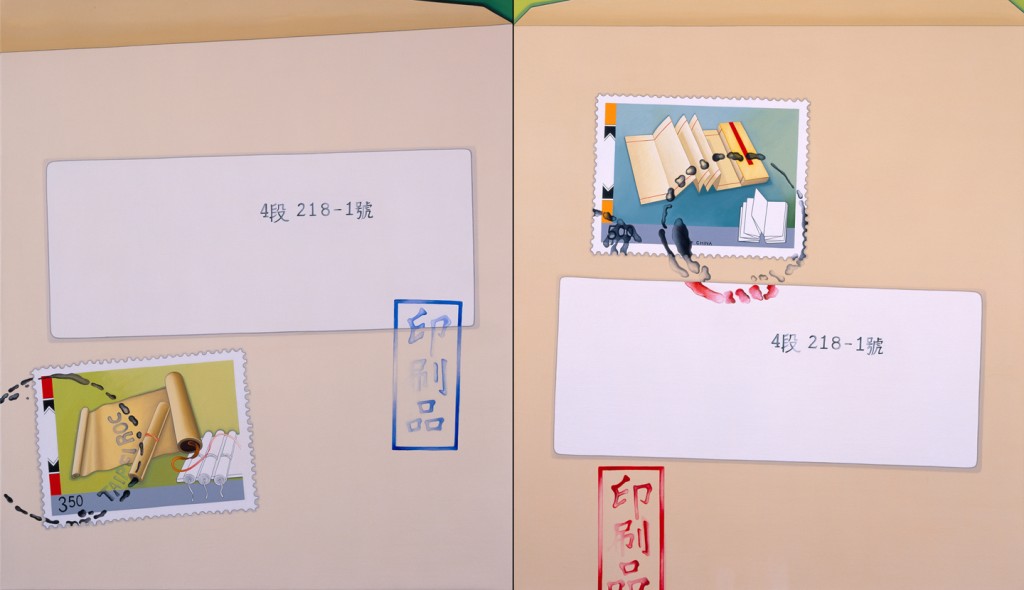 The largest work in the show, a 5-by-9-foot diptych titled Correspondence: Between Two, is a spare and elegant composition that recalls the infinite landscapes found in Chinese painting of the Northern Sung Dynasty.  In fact, Li-lan, an American with some Chinese ancestry, pays tribute to her Asian heritage in this work.  The image in each panel consists of a single, canceled stamp from Taiwan, and a rubber-stamp mark in Chinese characters that means “printed matter.”  The stamp on the left features a partially unrolled scroll, the kind traditionally used in the East for writing and painting.  The stamp on the right is similar but features a more modern-looking, Western-style book.  In this work, as in a number of other works in the show, Li-lan sets up subtly opposing elements that are deeply personal but also seem to have sociopolitical implications.