An Infinite Field of Memories and Imagination by Tung-Hsiao Chou

For more than five decades of her career, Li-lan, an American artist of mixed Chinese and European heritage, has worked persistently and passionately in transforming her life experiences and emotions into her art. Her work and style have evolved in her own artistic language throughout the years. Inspired by both European and American modern and contemporary aesthetics, Li-lan’s work often involves motifs from ordinary, everyday objects, which relate closely to her personal memories and nostalgia. In Li-lan’s art, figurative images, though they are not realistic reproductions per se, are mostly aligned in order, or with slightly casual arrangements. This creates an aura of tranquility and contemplation as though it were in a reverie. 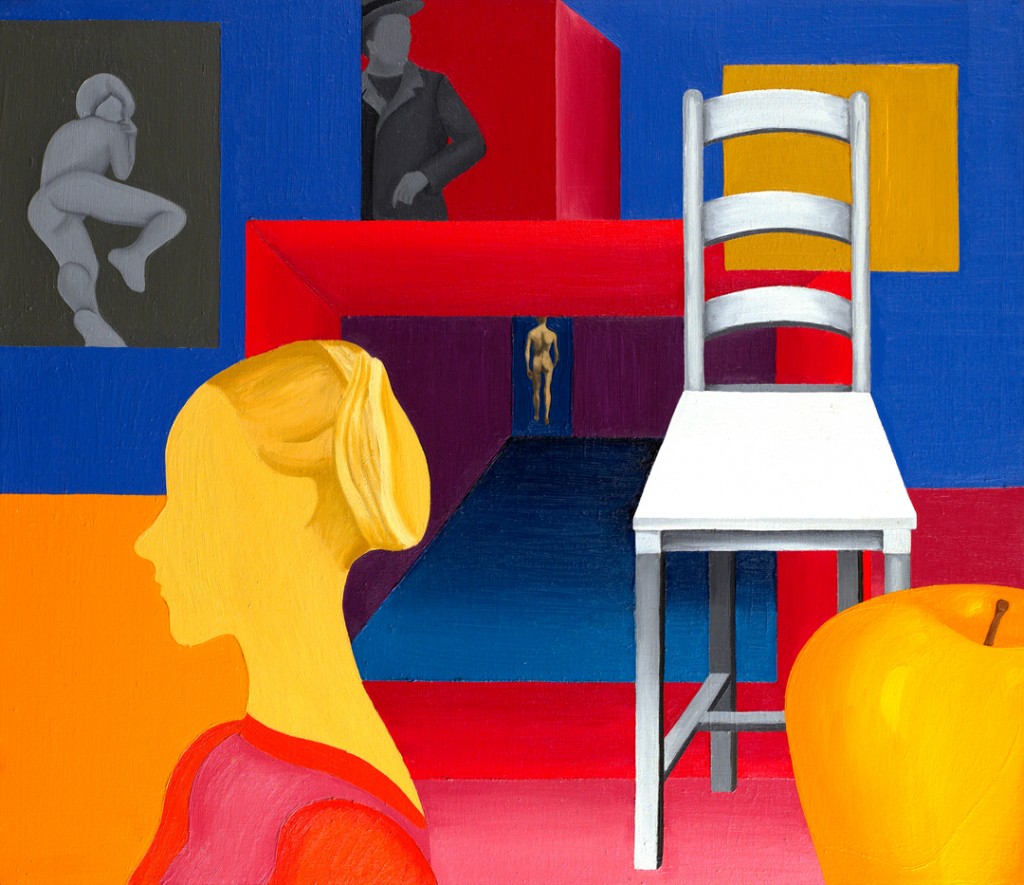 In her early years in the 1960s, Li-lan’s still-life paintings, featuring domestic interiors, were influenced by Impressionism, Post-Impressionism and Surrealism, while showing a deep appreciation of masterpieces by Renaissance painters. By 1970, multiple grids were constructed in her planer composition to indicate different spatial depths. In contrast, figures and objects of arbitrary proportions are purposely depicted without variations of light and shadow, which results in an extremely flat and unreal visual effect. Placed either in the foreground or background, they seem to be floating in one’s subconscious mind.

Further exploring the characteristics of grids and flatness in the latter half of the 1970s and early ‘80s, Li-lan focused precisely on using images of empty drawing pads, composition books and office supplies, which were found in the studio, as subject matter. On large-scale canvases, blank sheets of paper– whether complete, with irregular torn edges or rolled-up corners– are presented only with a thin margin of shadows to show very shallow depth of field. Detailed texture of legal pads and other colored graph paper pads that are meticulously generated by hand, as well as the objects’ enlarged proportions, enable them to be detached from their functional meanings in everyday life. The blankness, waiting to be filled in, is no doubt the main subject of the artwork. This blankness seems to have become an expected projection where emotions can be released. It is the artist’s private space; meanwhile, it is also an open invitation to viewers into the artist’s world. 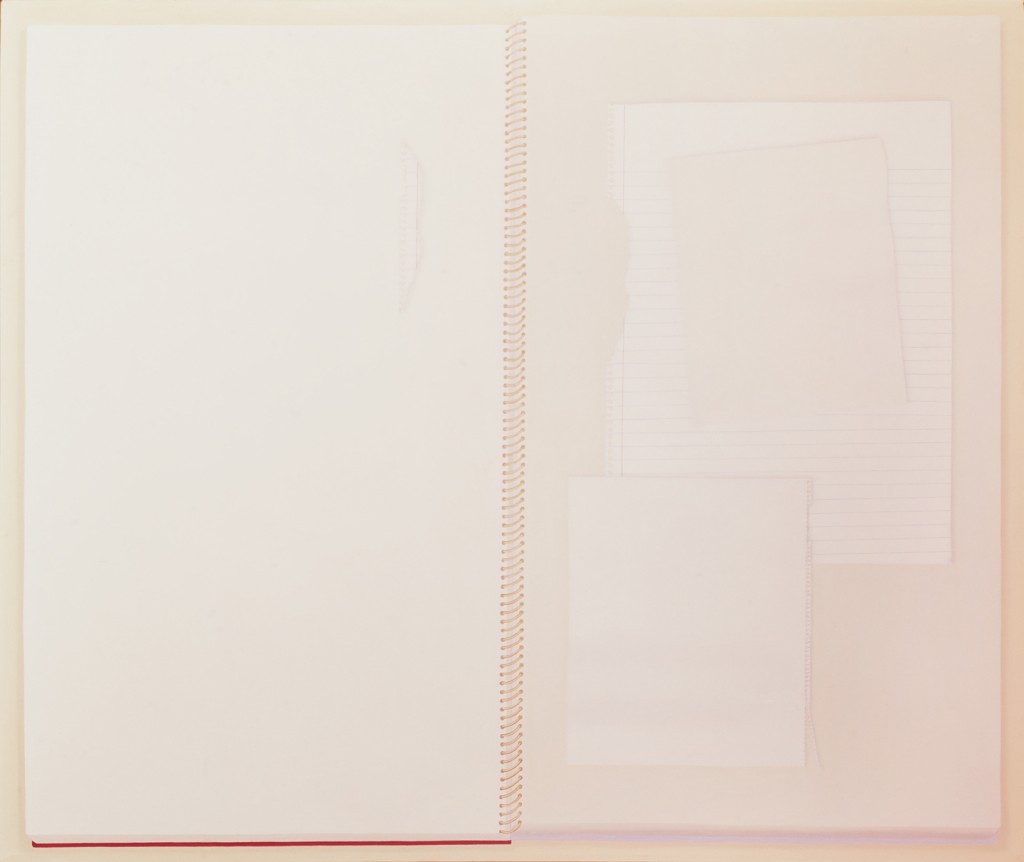 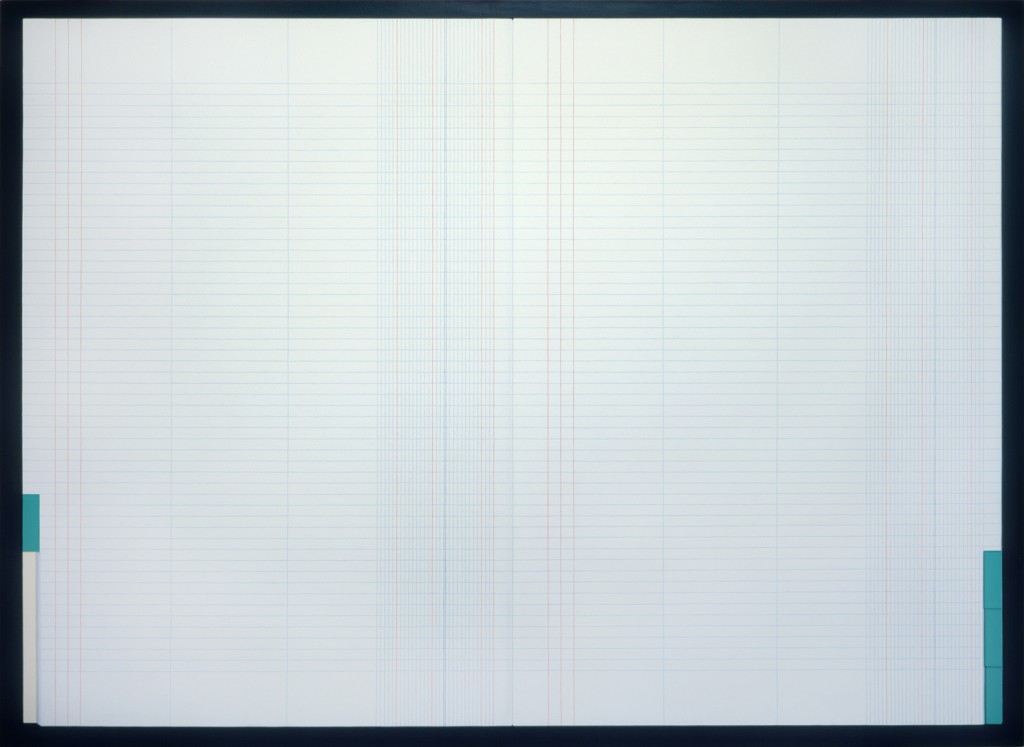 By the late 1980s and 1990s, postal correspondence has been presented as a theme of Li-lan’s paintings, where envelopes, postcards, stamps from around the world, post marks, such as “return to sender” or “forward order expired” can be seen. Sometimes, the same stamp that recurs itself is also rendered differently from one another in details and tones. Therefore, we see a quasi-collage composition on an expansive white background. During the 1990s, postal messages that are written in international languages and in printed form appear for the first time. It implies correspondence and communication between senders and recipients, and at the same time, brings a cross-cultural background to her art. The sources of the stamps in her art are not only of European and Japanese images, but more so of Chinese architecture in particular. The selection and combination of these images is not an accidental coincidence, but rather reflect the artist’s own life journey. These images are deliberately chosen, and have gradually become central to her themes later on. In addition, it is worth noting that figures reappear on her canvas after an interval of more than a decade. 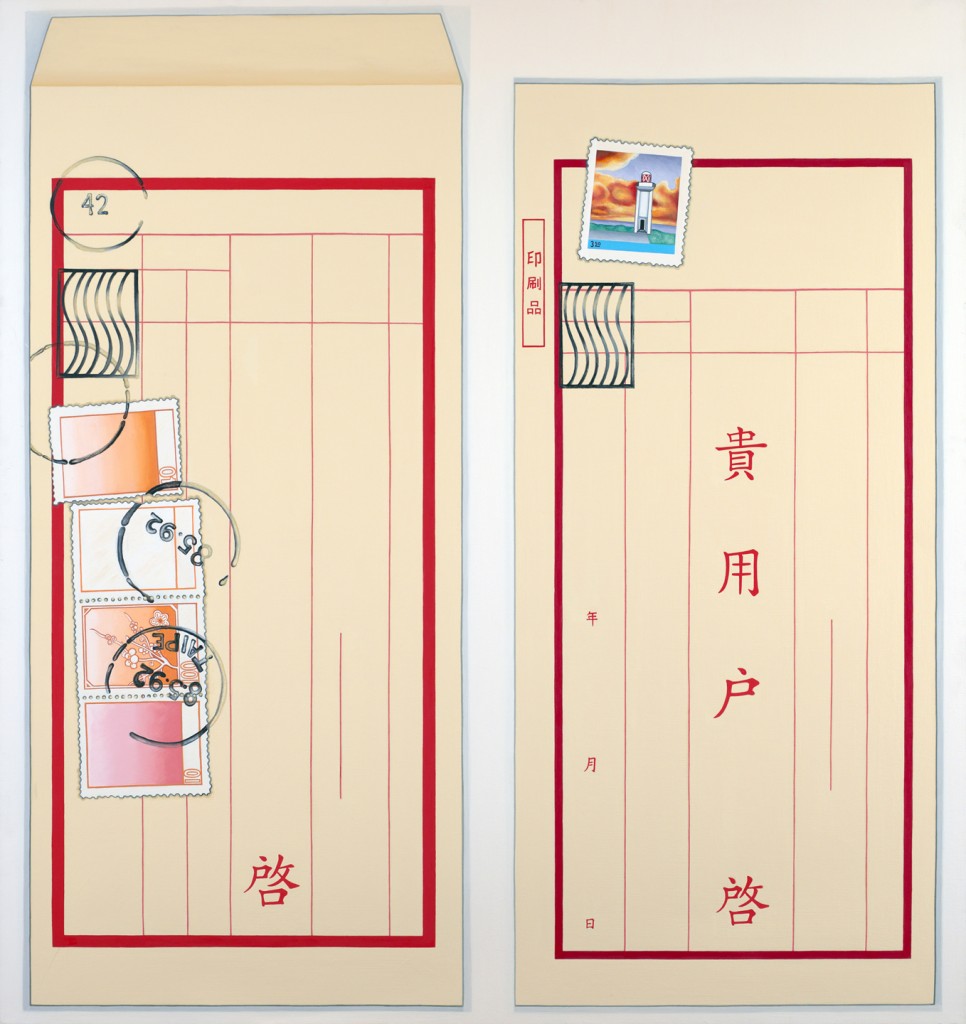 After the millennium, the ragged edge of the stamps in Li-lan’s work disappears off the canvas, leaving only the enlarged rectangles that contain colorful imagery. This is similar to the resetting of the focus of the camera lens, zooming in to a close-up on the hidden worlds inside the stamps. Li-lan continues to use readymade images of Eastern and Western architecture, insects, animals, airplanes, and figures. These cross-cultural subjects are mixed and presented in different scales and from multiple perspectives. They can be associated with fragments of the artist’s memories, some of which have personal meanings for her. 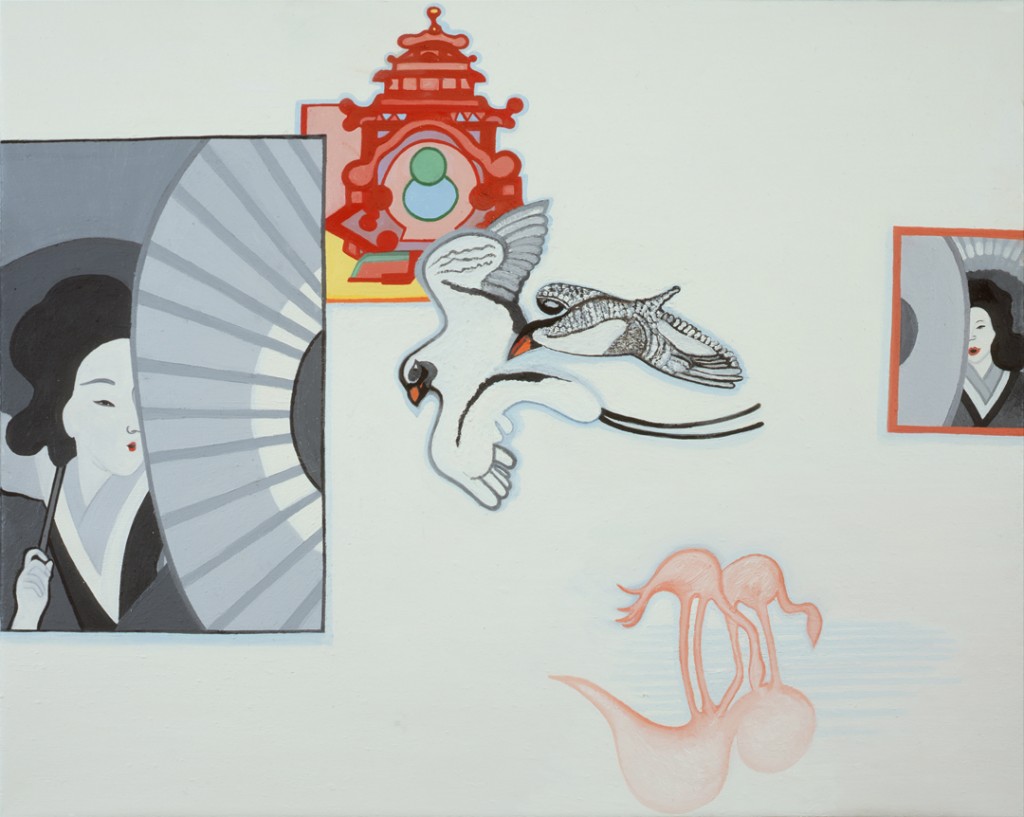 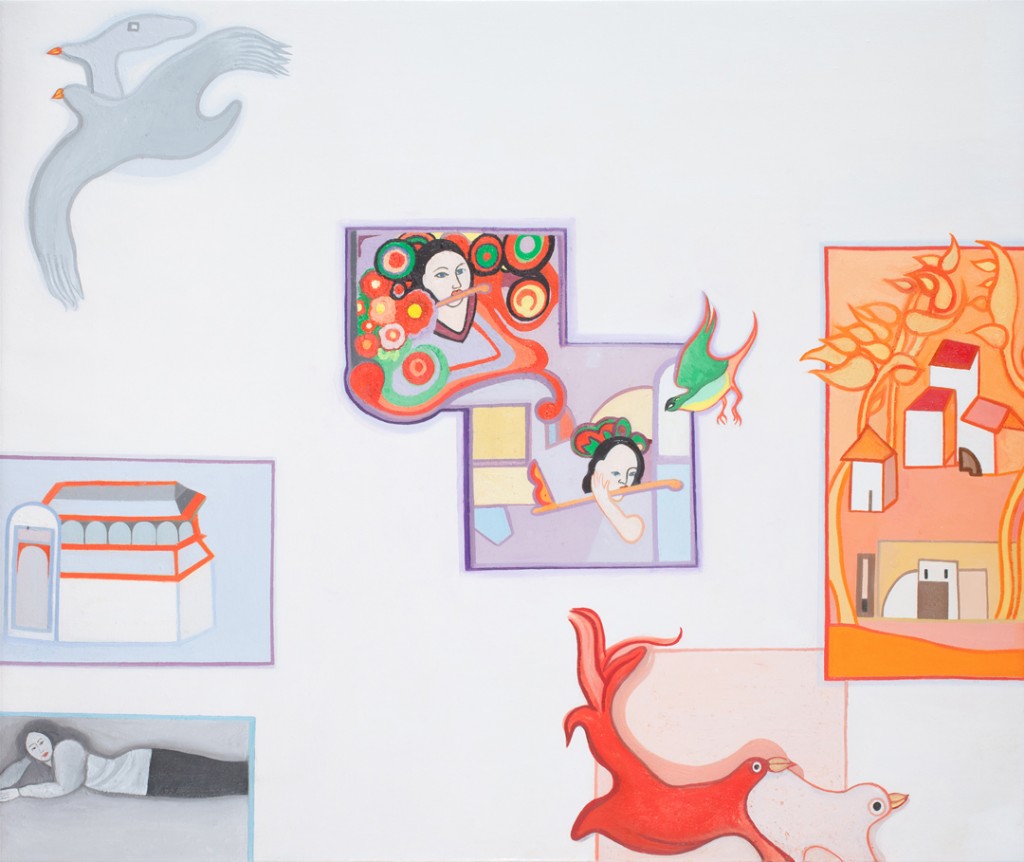 Li-lan’s recent work is inspired by Japanese folktales that provide a surrounding for possible narratives, even though they are not bound to any specific allegoric symbolism. Collage-like compositional arrangements lead to different scenes simultaneously, where they serve as multiple theater stage sets that are designed for different characters as well as creatures to perform in. There can be a Japanese woman dressed in traditional costume showing a partial view of her face behind a paper umbrella (Shadow in the Water, 2013), an Asian woman with a colorful headband playing a horizontal flute (Lost In a Night Reverie, 2014), a Peregrine Falcon catching a Eurasian Oyster Catcher with its claws (Pas de deux, 2009), and many more. What is captured on canvas is an instant moment of movement in progress, and the dramatic tension in the imagery stimulates viewers to explore all kinds of possibilities in their minds. 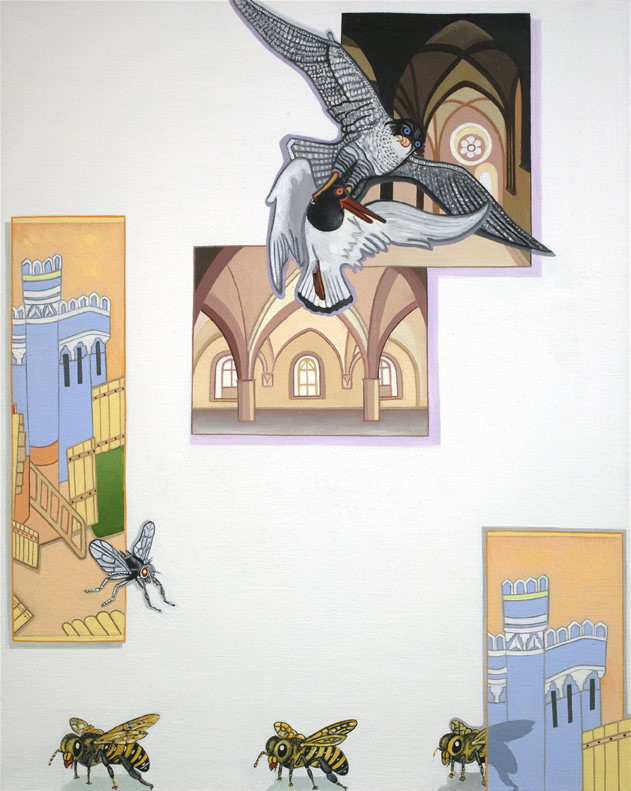 A contemplative landscape of the mind is delicately portrayed in Li-lan’s art, wandering between fantasy and reality. This is an infinite field of the artist’s memories and imagination, where viewers are cordially encouraged to engage and freely project their own thoughts.