Li-lan: The Game of Seeing Life by Peter Frank

Li-lan is playing a game with us. It’s not a competitive game, and if we play along, we all win. It’s a sleight-of-mind game, how you see it/how you don’t. And it’s very much an artist’s game, wherein image and meaning are manipulated into a gratifying choreography whose portent turns out to be the viewer’s invention, not the painter’s.

There is so much provocative information in Li-lan’s pictures that she tricks us into “reading” rather than seeing them. There is more here than meets the eye, but deliberately less than meets the emotions. These paintings are in fact are nearly as cool as they look, not as hot as they feel; the information they contain may seem freighted with narrative, or symbolic resonance, or political inference, but these comprehensions are not Li-lan’s, they’re ours. We make the dramatic investment in the work; hers is entirely formal.

Well, not entirely. The paintings do reflect Li-lan’s grasp of the world as a varied and wondrous place and the human endeavor that spans it a marvel of complexity. The pictures’ profusion of postage stamps from all over the globe, often accompanied by images from these remote and/or exotic climes, speaks to the artist’s curiosity, and quite evidently induces ours. Some of the stamps and images are at least obliquely autobiographical, recalling Li-lan’s mixed cultural heritage, her travels (especially to the sources of this heritage), and the contact she maintains with Asia and Europe, as well as her native America. Other stamps and images come from places she has never visited (at least yet). Equally, the stamps, the cancellation marks, the envelopes and their contents serve to embody the very spirit of adventure, collapsing time and space into an ongoing montage of associations.

Li-lan’s “program” is not the description of place, nor the account of going places, but the sensation of being many places at once – the meta-cubist condition of comprehending the world as a spannable, available site of tangentially related experiences, a continuous discontinuity if you will. This is a – the – post-modern condition, which in the digital (post-post-modern) age has become that much more acute. These are the paintings, however, of an individual whose consciousness was shaped before this condition pertained, and who now thrills at both the knowledge it brings so close and at the giddiness it induces. Li-lan’s is an art of armchair jet lag.

As such, wouldn’t it make more sense for these pictures to be generated with a computer rather than manually rendered in the exacting media of oil and pastel? No, and that’s just the point. To reiterate, these are not the artworks of a digital adept, but of a pre-digital mind – and hand – trying to encompass the digital (re-)rendition of the world, and finally able to do so only through the craft it knows. There is an exhilarating slippage of experience here, where nothing is taken for granted – not the new way of knowing the world, nor the old way of portraying knowledge. Li-lan paints and draws with exquisite deliberation, as if to slow down a world of speed-of-light rapidity so that its bits of information and its galaxy of sensations can be, if not known, then at least tasted. We talk of frozen moments, but Li-lan paints frozen nanoseconds.

The mail that populates Li-lan’s pictures, then, is not – or at least not only – the mail that arrives in her mailbox, but – also – a concretion of the e-mail that arrives in her e-mailbox. The Moorish arches and Shinto shrines, colorful postage designs and elusive cancellations, portions of faces and portions of paper (left over from her earlier, more austere but no less sensual depictions of stationery) that comprise her visual vocabulary could as well be hot links, jpeg attachments, and pop-up ads. (By no means, however, could they be spam.) Except that Li-lan paints what she paints to slow down these e-effects of the digital era, to give them heft and make them stop flickering, to make these virtual phenomena actual.

Li-lan has been associated since the beginning of her career with the photo-realist tendency. This association is not faulty, but neither is it accurate; the replication of the photographic image is not her goal, nor even what she achieves. The flatness of her imagery and its compositional adherence to the picture plane rather than to faux-veristic recessional space in fact aligns her more closely with Pop art. But Pop art’s deadpan re-presentation of a consumerized world is antithetical in spirit to Li-lan’s intimate subject matter and the lively enthusiasm she invests in presenting it to us. For all their cool tones and angular juxtapositions, Li-lan’s images display a close confluence of sight and soul; if, as averred, they are nearly as cool as they look, they are, indeed, slightly warmer. 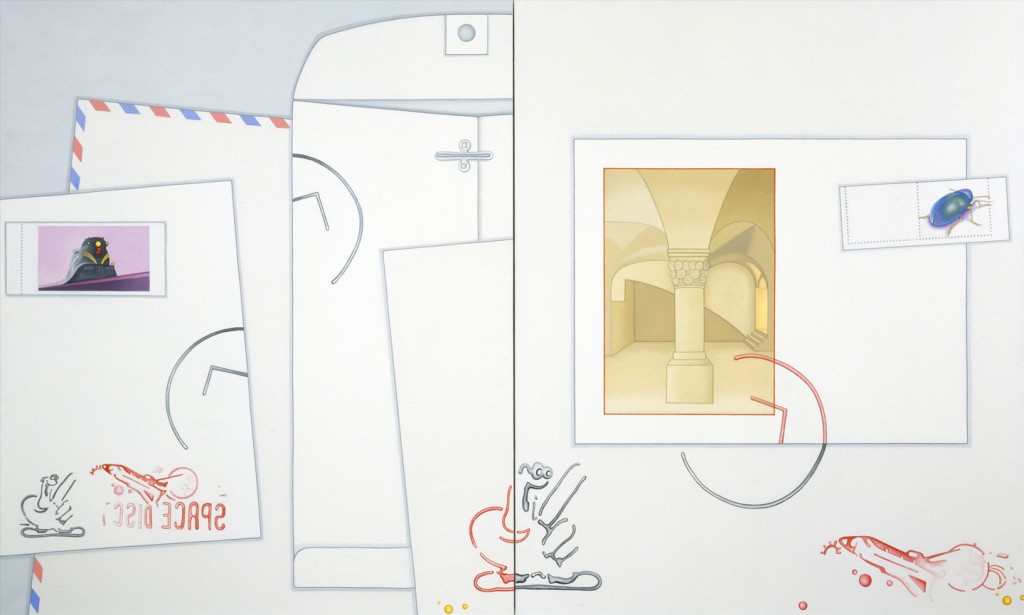 And how cool do they look, anyway? An off-white predominates, an off-white we readily associate with paper. But it is a bluer, milkier off-white than we expect, more limpid – cooler in temperature, yes, but “hotter” in its enhanced optical tactility – than the slightly green-brown off-white to which we are accustomed. The bluish white tends to recede, prompting the colors of the stamps and postcard images to jump out at us with added verve, and at the same time absorbing the gray cancellations ever so slightly, adding to their burr. The milky tone also amplifies the presence of trompe-l’oeil objects, the occasional insect or architectural detail that strays off the stamp or out of the photograph.

Those fool-the-eye objects may be misbehaving, but they are not upsetting an otherwise pristine order. Li-lan’s pictures conflate – perhaps deflate – space not only conceptually, but perceptually, with myriad elaborate shifts in relative position. Quite often one postcard or envelope appears inside, or even as physically part of, another. Stamp or souvenir images are interrupted, quartered, folded over one another, floated in shallow but ambiguous space, or pushed partway off the painting or drawing. A stamp or cancellation mark from one envelope can bleed through another one. And, of course, when a bug wanders across a photo of a building or a stamp bearing a pair of eyes, our sense of proportion is upended. No wonder Li-lan has been called a surrealist.

But these unlikely scalar and spatial shifts happen all the time in our lives – we’re all living surreally – and a century of modernist perturbation has inured us to their illogic. Fortunately, we are not immune to their playful provocation. By now, it’s all part of the grand game of perception – the game Li-lan plays with us, and herself, in every one of her gentle, delightful apparitions. It is not a game without rules, but it is a game without boundaries, expanding when necessary to encompass the breadth of our vision. Li-lan focuses on a limited portion of the game board, and her playing strategy consists of myriad – perhaps infinite – variations on a very few moves. Doing thus, she lets the new universe of our awareness burgeon exponentially on its own. 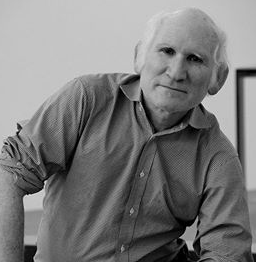 Peter Frank is an art critic, curator, and poet who lives and works in Los Angeles. He earned his B.A. and M.A. in art history at Columbia University. He was art critic of New York’s Soho Weekly News and later served as chief art critic of The Village Voice. In 1981, he was curator of the Exxon Biennial exhibition at the Guggenheim Museum, and he has been a curator for Dokumenta in Kassel, Germany. In 1988, he moved to Los Angeles, where he is now editor of Visions magazine and a regular contributor to L.A. Weekly. He is a vice president of the International Association of Art (AICA) critics, and he helped to organize the 1991 international AICA conference in Los Angeles.  He is a frequent contributor to The Huffington Post.
•BACK•
prev next