Li-lan belongs in the same way as I do to that increasing number of the not exactly belonging people. I understood her sense of isolation and escape to Europe soon after I met her in early 1960.  Since then it has always been a pleasure to see her in Tokyo or New York where she traces the steps I know so well. How fortunate are those of us who have gained the constancy of art to guide and welcome us.  Li-lan has found that blank page of our school notebook, which we may all claim as our own. Upon it we can write our thoughts freely, beyond race and without prejudice. 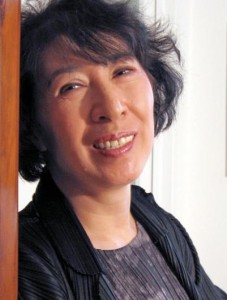 2000-2001 Art in Embassies Program, We the People of the United States: American Art at the Residence of the U.S. Ambassador to the European Union, Brussels, Belgium

The Parrish Art Museum, The Nature of Seeing: Works from the Collection, Southampton

Art in General, Paperworks in the Hamptons, Sag Harbor, NY (8/97)

1991 The William Benton Museum of Art, Encore: Reviewing the Past, Storrs, CT

American Academy and Institute of Arts and Letters, Paintings and Sculpture by Candidates for Art Awards, New York, NY (3/2/87 – 3/29/87)

American Academy and Institute of Arts and Letters, Paintings and Sculpture by Candidates for Art Awards (3/7/83 – 4/2/83)

The Guild Hall Museum, The Artists of the Hamptons: Painting and Sculpture, (Auction to benefit Guild Hall of East Hampton, at Sotheby Parke Bernet, NY, 9/18/75)

LI-LAN, Correspondence: Between the lines, Taipei, “Filling in Between The Artist’s Lines” by Helen Harrison, Lung Men Art Gallery, Taipei, Taiwan, May 1993

Chinese American Artists, American Art at the residence of the Director of the American Institute in Taiwan, Art in Embassies Program, Taipei, Taiwan, January 2001

We the People of the United States, American Art at the residence of the U.S. Ambassador to the European Union, Art in Embassies Program, Brussels, Belgium, July 2000

The Dragon and the Chrysanthemum: Chinese and Japanese Heritage in the Arts, Summit Art Center, Summit, NJ, March – April, 1979

Writing By The Artist

You Can’t Be Too Rich – Or Too Thin: Favorite Recipes from the Hamptons, Southampton Hospital, Southampton, NY, 1988

Sansegundo, Sheridan, “LI-LAN, Reaching Across Barriers,” The East Hampton Star, The Arts, May 11, 2000

Pai, Sharon, “Looking at the Grand Future of Art Through the Art of the ‘Grand Future’ Gallery,”

Cheng, Scarlet, “The Work of Li-lan: Postcards from the Edge,” Asia Times, Perspective,

Sansegundo, Sheridan, “Madre: Benefit Show,” The East Hampton Star, At The Galleries, May 6, 1991

“Curators Show at Tower,” The Southampton Press, At the Galleries, June 17, 1982